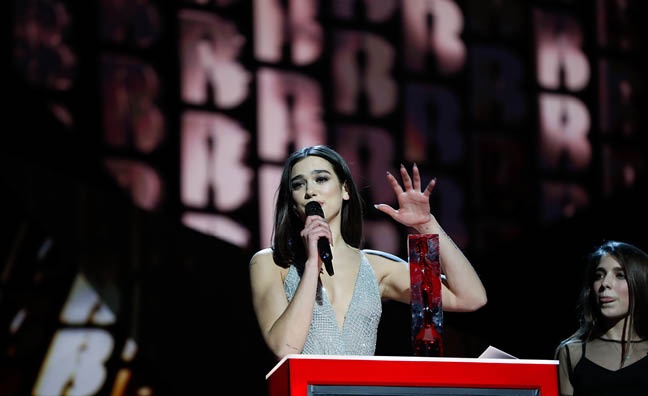 Dua Lipa is heading for a new sales peak in the charts following her double win at last week’s BRIT Awards and the performance of New Rules.

The victory and performance have already sent her self-titled debut up the albums chart, but the real impact from the televised ceremony looks set to take hold in the next chart rundown. Her album is currently at a new chart peak of No.2 on OCC sales so far this week of 7,070 – a week-on-week increase of 176%. Sales to date are 185,030.

“Everything’s now compounding public awareness of Dua Lipa – she had a great Live Lounge running into the BRITs, then winning the awards and the awareness grows exponentially for her now,” Christie told Music Week. “It’s a hugely significant win and it sets her up to be a truly significant British female pop artist.”

He described the success of the album as “slightly unconventional” as it was sixth single New Rules that “exploded the campaign” when it hit No.1 in the UK. The track has passed one billion YouTube streams.

“The album will continue to be streamed and IDGAF is just beginning internationally, so there’s still a lot of legs on it,” added Christie. “She’s one of the hardest working artists I’ve ever come across. Because of the campaign being so international, she has a very busy schedule supporting IDGAF as it goes around the world.”

IDGAF is currently steady at No.3 on the singles chart. Sales to date are 334,628, according to the Official Charts Company.

“I was really delighted with the speech, she really seized the moment to say something significant and that’s a credit to her have the presence of mind to take that moment,” he said.