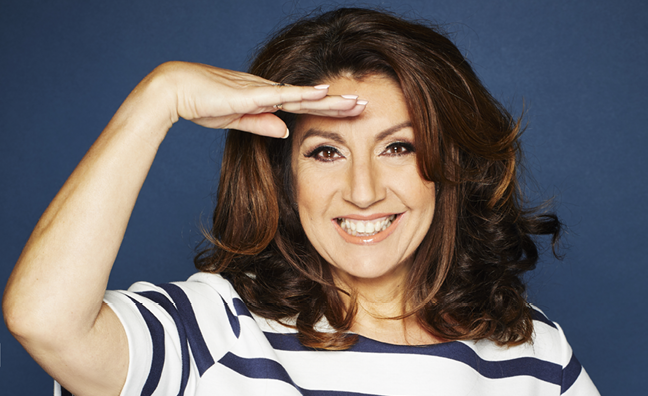 Jane McDonald is battling for a fourth consecutive week in the Top 10 – a sales performance that marks a commercial turnaround for the singer.

As revealed in the latest issue of Music Week, the album success for Cruising With has been masterminded by label services company Absolute in partnership with the singer and Channel 5. McDonald presents the travel series Cruising With Jane McDonald on the network.

“I approached Channel 5 with a view to doing a venture with them to put together all the songs that she sings at the end of each show, which are well-known songs relating to the country she’s in,” Absolute co-founder Henry Semmence told Music Week. “We put together a deal with Channel 5 to advertise through and around the shows and for her to promote it.”

Twenty years since she appeared on BBC TV series The Cruise, McDonald’s music career is now benefiting from the ratings success of both Cruising With Jane McDonald and light entertainment show Jane McDonald & Friends, which currently has a new series airing on Channel 5.

“She’s had a solid fanbase whenever we put music to market,” said Semmence. “But obviously the Cruising With series, which is delivering extraordinary viewing figures for Channel 5, has really pushed her profile right back up to the same level as when she was doing The Cruise 20 years ago.”

Cruising With is delivering extraordinary viewing figures for Channel 5

Semmence said there was a deliberate plan by Absolute to capitalise on McDonald’s two decades in the music industry. Her self-titled debut album has sales to date of 338,741, according to the Official Charts Company.

“She is the original reality TV artist – the cruise was the very first show of that type that came to market,” he said. “We started planning a year ago to do some various things to celebrate the 20th anniversary, including a huge tour which she is currently on and is totally sold out.”

Describing the album campaign in cooperation with Channel 5 as “fantastic”, Semmence said it’s the start of a strong partnership involving the channel.

“This record will go all the way through to Christmas without any question – and we’ll be looking at doing Cruising 2 next year,” he said.

To read the full interview with Semmence pick up the latest issue of Music Week – or subscribers can click here. To subscribe and never miss a big industry story click here.