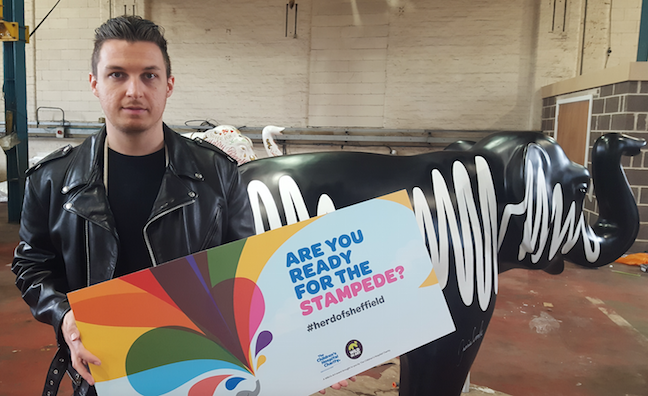 A 1.6m elephant statue signed by the Arctic Monkey’s is to be auctioned of in aid of The Children’s Hospital Charity.

The Children’s Hospital Charity’s on-going city installation Herd of Sheffield is an art project where artists are commissioned to design an elephant sculpture. These elephants are then installed around the Sheffield in a trail.

The elephants will all go up for auction on October 20th at the Crucible Theatre in Sheffield.

The 1.6m sculpture was designed by Matthew Cooper, who also created artwork for the band’s number one, platinum-selling album AM. It was then handed over to The Mural Artists, a Sheffield based group of artists who specialise in graffiti art.

"I was asked to come up with a design for the band's contribution to the Herd of Sheffield. The black and white oscilloscope from the band's 2013 album ‘AM’ seemed like a good place to start - a striking, minimal and instantly recognisable design,” said Cooper.

In a statement released by the band, Arctic Monkeys expressed their support: “We are absolutely delighted to be involved in the Herd of Sheffield and supporting The Children’s Hospital Charity.”

The AM elephant is one of 58 sculptures being auctioned off to raise funds for a new multi-purpose Fluoroscopy System at Sheffield Children’s Hospital - a state-of-the-art machine used for timely diagnosis and treatment of vascular trauma injuries such as internal bleeds whilst using minimum radiation.

“This is the first elephant sculpture in the world to be signed by the Arctic Monkeys and we’re willing to bet that it will be the last!” said Rebecca Staden, Fundraising Manager for The Children’s Hospital Charity.

“Whoever wins the bidding on this elephant will not only own a unique tribute to Sheffield’s cultural heritage – they will be leaving a lasting legacy for the patients at our hospital and children for years to come.”

Tickets for the auction cost £25. To buy your ticket head to http://www.herdofsheffield.com/get-involved/auction/