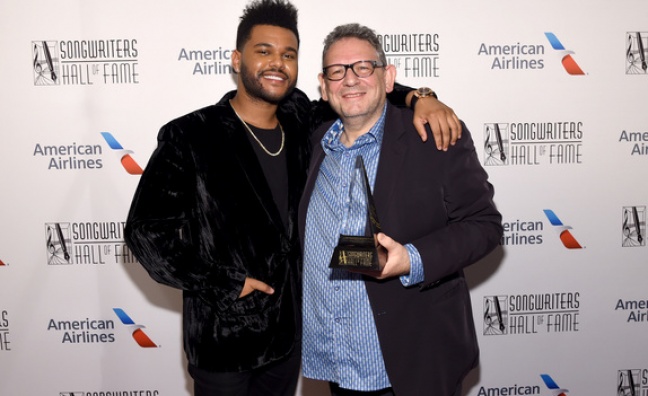 Sir Lucian Grainge was honoured with the Howie Richmond Hitmaker Award at the 49th annual Songwriters Hall Of Fame (SHOF) in New York.

The Universal Music Group chairman/CEO was introduced by The Weeknd at last Thursday's induction and awards dinner at the Marriott Marquis Hotel.

The Howie Richmond Hitmaker Award is named after one of the SHOF’s distinguished founders and is specifically tailored for an artist or “star maker” in the music industry who has been responsible for a substantial number of hit songs for an extended period, and recognises the genuine significance of the song and songwriter.

"To Linda [Moran] and the Songwriters Hall of Fame, I’m so moved by this honour," said Sir Lucian in his acceptance speech. "Howie Richmond was a giant in our industry and also happens to be the publisher of one of my favorite songs of all time, A Boy Named Sue. Receiving this Hitmaker award is a real tribute to the path he and others blazed."

"Because nobody gets here on their own. I owe so much to my wife Caroline, who brings harmony to my life, and to my entire team at Universal - whose passion and talent make my work possible. [UMPG chairman/CEO] Jody Gerson, especially, really knows how to a build a culture that puts songwriters first, and that always comes through in the music."