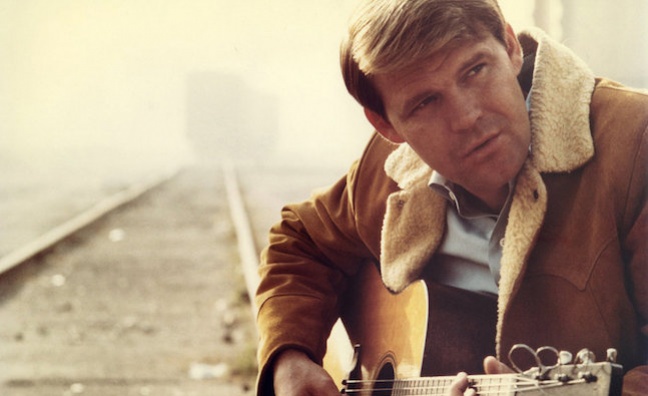 Sir Lucian Grainge, chairman and CEO of Universal Music Group, has paid tribute to Glen Campbell, who died on Tuesday (August 8) aged 81. The country crossover star was diagnosed with Alzheimer’s disease in 2011.

During a 55-year career, Campbell released more than 60 albums and sold 45 million records.

Adios (Universal Music Classics), his final album, was recorded between 2012 and 2013 and released in June this year. It peaked at No. 3 and has so far sold 61,259 copies. Campbell's biggest hits include Wichita Lineman, All I Have to Do is Dream, Honey Come Back and Rhinestone Cowboy.

“Glen Campbell will forever be an essential part of the fabric of American music,” said Sir Lucian Grainge. “He is not only one of the most versatile and brilliant artists ever to grace us, but he is someone who over the course of a remarkable 50-plus year career, remained as relevant and productive until his final years.”

Dolly Parton also paid tribute to Campbell, describing him as "one of the greatest voices of all time".

Brian Wilson of the Beach Boys tweeted that Campbell was "an incredible musician and an even better person.”

See below for a selection of tributes to the star.

I'm very broken up to hear about my friend Glen Campbell. An incredible musician and an even better person. I'm at a loss. Love & Mercy.

Glen Campbell was one of the greatest voices of all time. I will always love you, Glen! pic.twitter.com/LQFEWA42lF

So very sorry to hear this. Glen was such a talented, great guy. Thankful to have known him.https://t.co/RJcbGm5FCo

We say goodbye to the great Glen Campbell. But in out hearts we know that the Wichita lineman is still on the line

From the superb documentary about his final tour & battle with Alzheimers...God bless you Glen #RIPglencampbell https://t.co/UXTxazMDnA

TimsBreakfastBanger - https://t.co/jVvv5YhIeZ with Bobbie Gentry one of my all time favs x x Adios GC X

Glen Campbell is legendary, timeless & will forever have a huge mark on country music. We send our love and prayers to his family & friends.

So very sorry to hear that Glen Campbell has passed away. It's the end of an era of tremendous talent. RIP

Glen Campbell was an amazing performer, musician &, more importantly, a great dude. He will be missed.

Try a little kindness. Thank you for THE words to live by Glen Campbell????????

Extremely sad to hear that Glen Campbell has passed away. My prayers and thoughts go out to him and his family.

Dear Glen Campbell Rest In Peace As well as your incredible musical abilities you were one of the most down to earth ppl I have ever known.