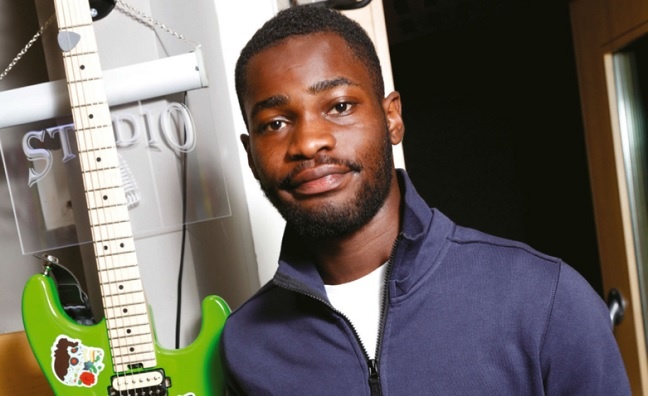 Dave and Fraser T Smith are in the running for an Ivor Novello Award with Black. Here, in our BRITs preview feature from February 2020, the producer, songwriter and musician opens up about working with Dave on the winning album...

Dave’s candid debut album, Psychodrama beat the likes of Harry Styles, Stormzy, Michael Kiwanuka and Lewis Capaldi to claim the album of the year honour at the 2020 Brit Awards.

It was yet another huge achievement for an album that has already topped the charts, gone gold, secured universal acclaim and even won the Mercury Music Prize.

In the new issue of Music Week, the album’s super-producer Fraser T Smith explains why it represents a significant breakthrough in more ways than one.

Here, in an unread extract of our new interview, Smith talks more about the making of the record and where Dave might be heading next as an artist…

You've previously told us that you and Dave jammed a lot while making of the album – how much unreleased material do you have?

Fraser T Smith: “I've got hours of film footage of us jamming, me on bass, him on piano. I've got hours of jams which were, for me, a cathartic, fun, improvisational exercise that meant that when we came to get down to business there was a fluidity with the music. I think that’s something that people don't do very much anymore, especially in the studio. We were just expressing our musicality. He's now learning to play guitar, so I think his next journey will be into the guitar world. We're used to seeing a superstar rapper now, but it’s so exciting to feel that he's got all that musicality to go.”

Both yourself and Dave visited his brother in prison while making the album – what did that do for the record?

“As a producer, really getting to know the artists that you work with and really getting to know what drives them, what fuels them, is really, really important. I think Dave knows that I massively care for him and look out for him, and his brother is a huge factor in his life. So, for me to go and visit him and swap ideas about books that we've been reading and really start communicating with him was just important as a friend, and I think that comes out in the music. It gives you context in terms of his lyrics and in terms of his musicality, which I think is really, really important.”

Dave told Music Week that the album would not only be “down a lot of big songs” without you, but also the lyrics wouldn't have been the same without your input. What was the key to helping him get to where he wanted to go, lyrically, on this record?

“I think that, conceptually, my role was important, but I don't want to take credit for the lyrics per se. It's important to say that he comes with the most incredible lyrics, I’m probably a bit of a rudder on the ship. That overview came in handy when he would come with concepts and we'd look at those. But in terms of him going into the lyrics, he goes in the same way as all the greatest, greatest rappers. His gift is to have the ability to concentrate for days and days, and sometimes weeks, on end on a lyric or a line.”

Compared to a lot of modern albums that sometimes approach (or break) the 20-track mark, Psychodrama is a rather svelte 11 tracks. What impact did that have on how it was received?

“We always viewed it as an album, rather than, ‘Well, let's write the best songs we can and then put it all together.’ It could never work like that. We were used to hearing track listings and the flow of it and there were a couple of tracks that we decided to leave off. You always want to leave people wanting a little bit more rather than, ‘Oh my god, I don't want to hear that again for another six months.’ With my favorite albums, I can always feel like I can go back to the beginning again.”

Subscribers can read our interview with Fraser T Smith here.