The 1975's Matthew Healy on life as a political pop star 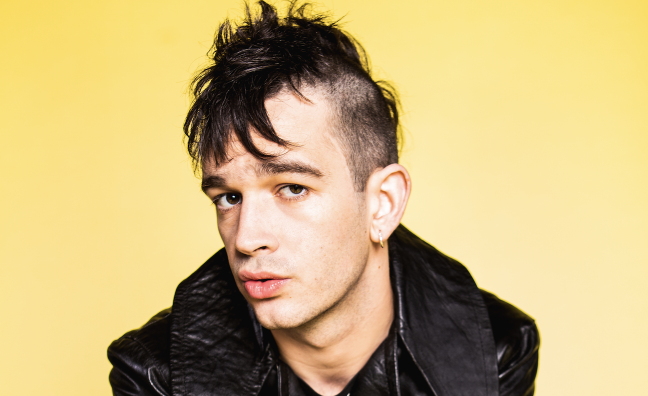 In the run-up to the release of their fourth LP Notes On A Conditional Form, Healy opened up about the two-album campaign, lockdown, his lyrical process and his plans for the band’s “violent” new album.

In February, Healy made the headlines for his comments on Twitter relating to his band only playing festivals with a 50/50 gender split. January’s announcement of The 1975’s special Finsbury Park show scheduled for July came with the news that it would be “the greenest show” ever seen there. All of which was in the wake of the band’s hook-up with teenage environmentalist Greta Thunberg, who provides vocals on the new album’s opening track.

“I suppose I am a political pop star, but it comes from what I see as a need to be,” said Healy. “I’d happily be pop star A or B, but it feels pointless. It’s a job that needs to be done and there’s no one else to do it. I don’t mean that pop stars are saving the planet, but people doing big events in parks for young kids are people like me, that’s where a job needs to be done.”

I’d happily be pop star A or B, but it feels pointless

The 1975’s singer is no stranger to drama on Twitter, and referenced a tweet about the fallout from Trnsmt Festival boss Geoff Ellis’ comments about female artists earlier this year.

“There was that bloke [Ellis] who said that thing that I had to delete my tweet about, that girls weren’t picking up guitars or whatever,” Healy said. “People have bad taste in music and they try to justify anything.”

Healy feels it’s his duty to lead by example in everything he and The 1975 do.

“People like me have got to make examples,” he said. “If I’m in a massive band now, and I could potentially influence something that would make women feel more, I don’t know what the word would be, included or whatever it may be, more assured in their position, it takes people in my position to try and do those kind of things. To be honest, I just want to help.”

Healy said it remains to be seen whether The 1975’s Finsbury Park gig will take place as planned. “I wouldn’t want it to happen [in the current situation], one wouldn’t do it,” he said. “Let’s see where we’re at later.”

But whatever happens with the show, The 1975’s efforts to stage a sustainable event are still important to the singer.

I'm willing to get amongst it and misunderstand until I understand

“Who else can walk to Finsbury Park and be like, ‘I’m gonna do a gig here with my band’ and they go, ‘Yeah cool’?” he said. “So if you can do that, fucking sort it out. Do the right thing. You don’t want to go and fuck up Finsbury Park anyway, let alone if it’s gonna have further climate complications. That’s what we know we need to do isn’t it?”

Healy said he listens to informed voices to better understand the issues close to his heart.

The frontman called for more patience in tackling such subjects. “It’s complicated,” he said. “You know what my ideal situation would be? The removal of slapping ideologies onto really complex, nuanced situations that if, we had more patience we could try and deal with on their own merit. People just go, ‘This is like that so you’re a racist or you’re a misogynist’ or ‘this is a that.’”

He acknowledged he’s the subject of “loads of shit on Twitter” but said he’s “willing to get amongst it and misunderstand until I understand, learn as opposed to getting defensive”.

Healy told us he doesn’t “revel” in his role as an activist and believes that a “spiritual reinvention” is necessary for progress.

“If stopping doing plastic at Creamfields can help ignite this broader shift where we start realising, ‘Fucking hell, we really need to change our relationship with ourselves and the world,’ then how fucking bold,” he said. “I don’t know what the other solution is, what are we gonna do? Just stop using fucking straws? It doesn’t seem like that’s gonna do anything.”