'The opening week is a real statement': Kylie Minogue hits No.1 with BMG 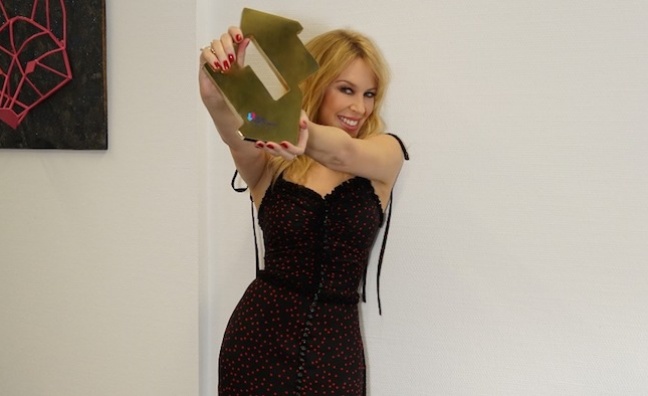 Kylie Minogue’s new album with BMG has become her first No. 1 in eight years.

The singer’s 14th studio album, Golden, had first-week sales of 48,000, according to the Official Charts Company. The country-influenced record was powered to the summit by physical sales, which accounted for 77% of its total.

Golden is Minogue’s first album with BMG after almost two decades with Parlophone.

“We are so thrilled to have been part of the wonderful journey to achieve a sixth UK No.1 album for Kylie,” said Norbury. “The success of this campaign has been due to the perfect combination of an artist at the top of her game, an outstanding album and a perfectly executed marketing campaign. The opening week is a real statement and sets the tone for the next 18 months. BMG is honoured to have partnered with Kylie on Golden and everybody involved has played their part in achieving a No.1.”

BMG is honoured to have partnered with Kylie on Golden and everybody involved has played their part in achieving a No.1

“Thank you to everybody who has been involved in getting Golden to No.1,” added Minogue. “I am so overwhelmed, happy, proud, emotional and very, very thankful and grateful.”

The album campaign also helped lead single Dancing to finally crack the Top 40 this week in its sixth week on the chart. Minogue’s 51st Top 40 hit has OCC sales to date of 64,609, while follow-up single Stop Me From Falling debuts at No.78.

Golden is the No.1 vinyl album, with 6,400 sales making it the fastest-selling vinyl album of 2018 so far. And it is the biggest-selling release on cassette so far this year.

BMG is building on its first decade in business with some major signings. It has a big rock release coming up with A Perfect Circle’s comeback on April 20, and the company had its first singles chart No.1 last week with Freaky Friday by Lil Dicky and Chris Brown.

George Ezra, who has the fastest-selling album of 2018 so far, is signed to BMG for publishing.