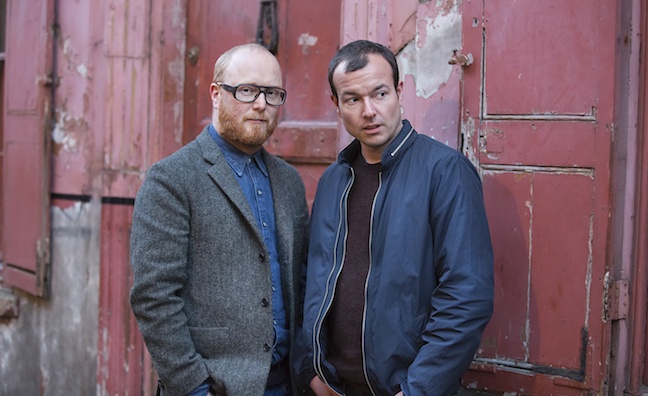 As well as being a huge video game franchise, Assassin’s Creed has its own soundtrack series. Alongside the new release of Assassin’s Creed Odyssey, the OST has been issued by Ubisoft Music following the first official AC single, Legend Of The Eagle Bearer.

Ivor Novello award-winning songwriting and production duo The Flight - Joe Henson and Alexis Smith - have previously worked on scores for Horizon Zero Dawn and BBC documentary series Drugsland, as well as early recordings by Lana Del Rey. Here, the pair open up about the opportunities for music and gaming...

How did the Ivor Novello win this year for the Horizon Zero Dawn game soundtrack help your career?

“It’s an award that we were really honoured to win. For us it isn’t just about how it furthers our careers, but about being recognised alongside such an esteemed list of songwriters and composers. Everyone in the industry respects these awards and it can only do us good."

Is there now more appreciation of video game scores?

“Scores for video games are getting more and more recognition. The quality level has risen dramatically over a relatively short period of time: from bleeps and bloops on an Atari console to fully realised music with live players on today’s big titles. Video games themselves are becoming much more mainstream entertainment, and radio shows such as High Score on Classic FM are helping to raise the profile of game scores by bringing them to a wider audience.”

What are the opportunities in terms of streaming, live and music publishing?

“It seems that there are now lots of opportunities for live performances of video game music. In the past it would have been very much a niche interest, but that has now changed. We recently had some of our music from Horizon Zero Dawn performed by the Royal Philharmonic at the Royal Albert Hall.

“Game soundtracks are also doing well on the streaming services, letting players and listeners instantly find the scores after the game has been released - although how much of a revenue stream this is for either the publisher or composers is yet to really be seen."

Scores for video games are getting more and more recognition

How do you approach a soundtrack for such a huge game franchise like Assassin's Creed?

“We are both fans of the franchise, and have played some of the previous games, although that wasn’t really massively important as this one had such a different historical setting. That was the main inspiration; finding a way of incorporating an ancient Greek flavour whilst still creating a contemporary sounding score.

“We did a lot of research, and were sent a lot of material from the developers as they built the world; video playthroughs, concept art, storylines etc. These inspired us and let us create the structure of the score, which was based around the journey of the hero and the different places and people they come across.”

What was the response to the single?

“The reaction to The Legend Of The Eagle Bearer was fantastic. It’s quite a spartan rock ‘n’ roll track, and Ubisoft thought that it would get people’s attention ahead of the main launch, which it seemed to do.”

What can people expect from the album - is there a loyal following for the soundtrack series?

“Hopefully the audience won’t be exclusively Assassin’s Creed gamers, but anyone who is interested in the historical setting or our previous music. Having said that, because of its standing as a franchise, and the fact that there has already been lots of great music written for it, there is a loyal following of fans, who we really hope enjoy it.

“Because of the size of the game, we had to compose a lot of music for Odyssey, so it’s a pretty extensive album. Most of the music you hear while playing is on there, as well as some versions of tracks that we have made more suitable for standalone listening.”

What are you working on next?

“We are working on a couple of new games projects, but because of very strict NDAs we’d have to kill you if we told you!”