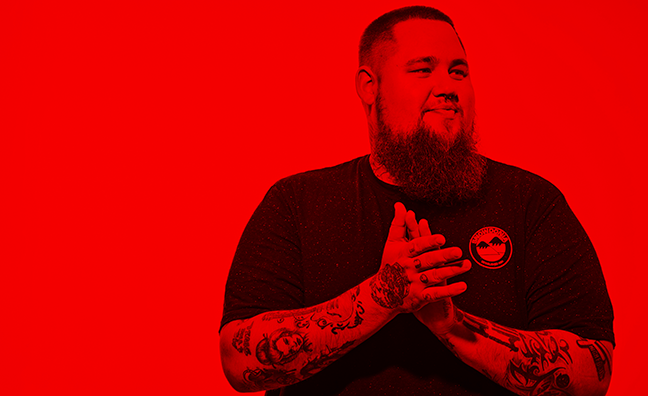 The co-writer of Rag'N'Bone Man's BRIT Award-winning single Human has told Music Week the huge international success the song has gone on to achieve took everyone by surprise.

Multi-platinum songwriter, producer and performer Jamie Hartman has recalled how he first came to work with Rag'N'Bone Man, real name Rory Graham, on the song.

“Julian [Palmer, Columbia A&R] played me a song that Rory had done with [songwriter/producer] Jamie Scott, called Arrow, and I thought it was amazing," said Hartman. "It was the first time I’d heard Rory’s voice and I was blown away.

"I said I’d love to work with him, so we hooked up at The Dairy [studios] in Brixton and that’s where [Human] came together. We tightened up the second verse and we wrote the bridge together on that first day. It was born in America and then came to England to be finished up."

"I wasn't expecting anything like that," laughed Hartman, "but I knew we had a good song.

"To give the label its due, I sent the Human demo in and within 20 minutes I had a phone call from Julian Palmer saying, ‘Fuck me, this is it! This is the song! This is what we are going to build around.’ He also knew that he wanted to get [producer] Two Inch Punch to work on the track. Rory was the man for the song - it was meant to be.”

“Clearly, it was a moment - which is what the label always needs - that moment that is going to make a statement. I didn’t realise quite how big a moment it was going to be, whoever would? But when I started hearing the body of work and the producers involved - and knowing that Jamie [Scott] was writing on the record - I just knew that it was going to be great, because they weren’t going to compromise on the quality of the songs.”

He is also a performer in his own right as the frontman of pop-rock band Ben’s Brother, whose 2007 single, Let Me Out earned him an Ivor Novello nomination for Best Song Musically And Lyrically. He agreed a new worldwide deal with Reservoir last October, having worked with them since 2012.

Click here to read our story on the making of Human, the LP, which was nominated in the BRITs' British Album category.