"There's nothing to fill the void once they're gone": Frank Carter on the importance of record stores and grassroots venues 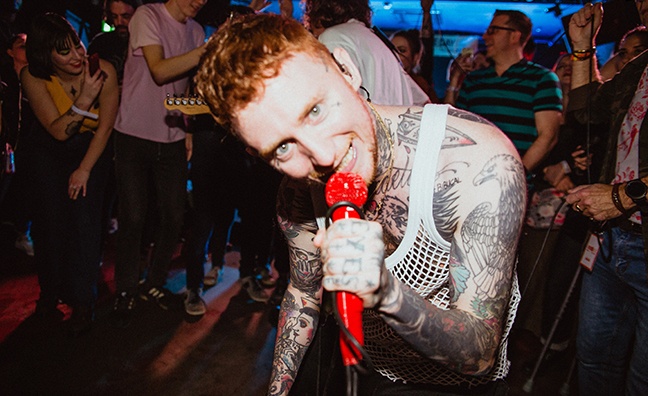 This Saturday (April 13), over 200 independent record shops all across the UK – not to mention thousands around the world – will get into the groove to celebrate all things vinyl with a host of one-off special releases, artist performances and events for Record Store Day 2019.

In the new issue of Music Week, not only do we speak to RSD 2019’s co-ordinator Megan Page to find out what’s in store this year, we also catch up with one of the event’s biggest artist advocates: Frank Carter.

Not only did he help launch RSD 2019 in the UK by playing a special show at the Ace Hotel in London back in February, he has also been extremely vocal about his profound love of independent record stores – especially Kingston’s Banquet Records, St Albans’ Empire Records and Watford’s LP Café – seeing them as a “safe haven” for music fans.

In the interview Carter was open about just how important independent record stores are to artists – especially those that lean toward the heavier side of music.

“They’re integral,” Carter told Music Week. “They’re absolutely integral to every single aspect of your release – they’re the places you trust where people are really going to focus on buying your album. For our release week in May, we’re playing in-stores at places like Portsmouth, Bournemouth, Brighton, Kingston – all indie record stores. And what we’re able to do now is bigger shows that are outside but are linked to those stores. So people can buy a record at the store and that’s how you get the ticket to the gig.”

Carter also weighed in on the notion that record stores should be given government protection as places of cultural importance.

“Naturally, places like Banquet have to fight to survive because there’s always a fluctuation,” Carter told Music Week. “There should be some sort of government benefit because those places are inspirational, they’re educational in the same way libraries are. Take something like Spotify – it’s beautiful, every single song at your fingertips is absolutely wonderful. But you can’t sit at home and feel what you feel listening to Spotify the same way you can when you’re in a store with people. That’s the real unique aspect: the social element of it. That’s what I think is lacking and why they should be protected. And it extends beyond that, too.”

There should be some sort of government benefit for record stores because those places are inspirational, they’re educational in the same way libraries are

Specifically, Carter went on to stress how supporting indie record shops on RSD is just one part of the wider ecosystem that supports rock bands.

“I think there is an absolute urgency to protect smaller venues, too,” Carter added. “Because those smaller venues that are disappearing, they have no funding, they’re scraping to get by and more and more are falling apart. Where do we go from there? I believe there should be provision put in place so that whatever is being built, there needs to be something of a similar standing with the same atmosphere so that it’s not just gone.”

He continued: "We need to support young future rock bands that can carry the torch. Once these venues and record stores start disappearing, there’s nothing in place to fill that void. They're gone."

The new issue of Music Week takes an in-depth look at the world of physical music. For our cover we speak to new HMV owner Doug Putman about the future of the high street retail giant. Elsewhere, we speak to Record Store Day co-ordinator Megan Page to get the lowdown on this year’s event, Frank Carter stresses the importance of indie record shops and small venues to artists, we take the pulse of the vinyl market and look at the growth of cassettes.

Frank Carter & The Rattlesnakes release their new record End Of Suffering on May 3 via International Death Cult.