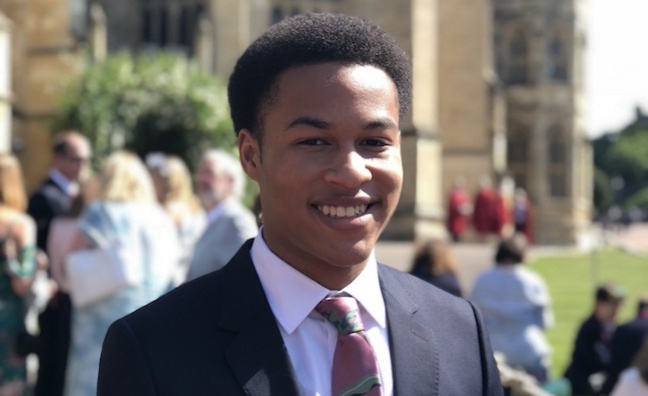 Teenage cellist Sheku Kanneh-Mason is set to maintain his Top 20 position with debut album Inspiration, according to the latest Midweek chart update. The record has also charted in the US at No.60.

The rising classical star, who’s nominated at next month’s Classic BRITs, has seen a significant sales boost from his performance during the royal wedding of Prince Harry and Meghan Markle. The ceremony had an estimated audience of 1.9 billion. Here, Decca president Rebecca Allen looks at the opportunities for Q1 breakthrough artist Kanneh-Mason and takes Music Week inside the rebooted album campaign…

What are the plans in the US?

"We’ve got a great label partner, Decca, which comes under the Verve Label Group in the US. They are hugely behind this, so there’s a big marketing plan from them, he’s going out there. Sheku’s been on Good Morning, America, he had a big CBS special. He’s done the Washington Times, the LA Times, New York Times, they have all clobbered it. There’s something happening in America, which is incredible. In the US, it was really extraordinary because he went to the top of iTunes and Amazon [immediately following the wedding] – he had No. 1 on both on downloads. That is a rare thing to see, to have a Shostakovich cello work above Post Malone and all the likes of those artists. That’s extraordinary."

Is there a big promotional push following the wedding?

"It’s a really amazing opportunity for him. He did media all weekend [of the wedding] and we can’t quite keep up with the requests, we’re having to monitor it. Sheku is about to take his exams, he’s a first year in the Royal Academy of Music. We have to balance this kind of exposure with the fact he is at one of the top conservatoires in the world. It’s not celebrity for him, it’s about being a great cellist and therefore we have to work very closely with his family and manager to ensure he has time to do his studies."

How will you reignite the campaign?

"These are brand new audiences who have perhaps never bought a classical release before. So our job is to rewind right back to the beginning, and go back to them with content and messaging that brings them along on the journey of Sheku. It’s a really incredible album, it’s been critically acclaimed, I don’t think tampering with it at this point is necessary. We just need to tell the story of Sheku and get that message out there to these new audiences."

This is about a long game with Sheku, we want to be in it for 30 or 40 years with him. He’s a great artist

Will there be a new track?

"We live in a streaming era and content is absolutely vital. There will be new pieces of music that he will record, there may be potential collaboration with other artists. [But] we feel very confident we can bring audiences into Sheku by this album as it stands. We’re going to go back onto the Bob Marley video [the cover of No Woman, No Cry]."

How has Sheku handled the attention following the Royal Wedding?

"This guy is incredible. I asked if he was nervous, he said, ‘No, I love what I do’. He’s such a calm, sensible, very committed artist and we’re so super proud of him. To be 19 years old and play for that audience – not only the people in the room but the 2bn the global TV [audience] figure, he handled it so graciously. This is about a long game with Sheku, we want to be in it for 30 or 40 years with him. He’s a great artist."