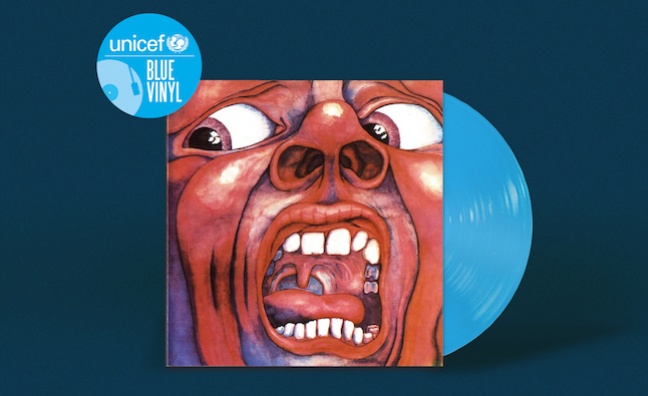 Tim Clark, ie: music founder, has spoken to Music Week about the “exceptional” artists who feature in the Blue Vinyl fundraising campaign for UNICEF.

Fifty special limited edition blue vinyl copies of 16 famous albums are being issued to raise money for UNICEF’s work for children affected by wars and disasters. The one-off editions include Amy Winehouse’s Back To Black, Bob Marley And The Wailers’ Catch A Fire, Alicia Keys’ Songs In A Minor, David Bowie’s The Next Day and King Crimson’s In the Court of the Crimson King (pictured).

Each of the LPs has been pressed in UNICEF’s cyan blue vinyl and individually numbered from one to 50. To acquire one of the limited editions, fans can pay £5 to enter an artist specific prize draw, or there’s a minimum £250 bid for the No.1 edition of each record. Here, Clark tells Music Week how a piece of music history can help children in need…

How has the music industry responded to this initiative?

“When we presented the idea of UNICEF Blue Vinyl, the response to it was entirely positive. Many well-known figures in the music industry said it was such a great idea. However, like all new initiatives, it can be very hard to sell in. The auction part of the project raised a decent sum of money, but the raffle has not been quite as successful. We are still working very hard on promoting the raffle.”

How did you decide the list of albums - and are there any personal favourites?

“We had a much longer list of albums, as you can imagine, and there are many great names and their albums missing. So, this is a matter of canvassing all of those artists, but we knew that we couldn’t have much more than the 16 we finally arrived at. We obviously aimed to have a broad range of genres and a diverse list of artists, and I think by and large we did achieve that. All of these artists are exceptional and we’re so grateful for their generosity to the UNICEF cause.

“Of course, Robbie Williams has to be among my personal favourites. But many years ago, I had the privilege to work with Bob Marley on the Catch A Fire album. And I remember seeing Paul Simon at the Royal Albert Hall performing the Graceland album; an unforgettable evening, but they are all wonderful albums.”

Many years ago, I had the privilege to work with Bob Marley on the Catch A Fire album

What’s the reaction been and how much are you hoping to raise?

“We have worked closely with Givergy and it has been a real learning curve for all of us. Our target was £100,000 and we are not there yet, so for any of you reading this that haven’t already entered the raffle, please do!”

How will the auction/prize draw help UNICEF?

“All the money raised from this effort will go to the Children Emergency Fund. We see pictures daily of children suffering in war-torn countries around the world. We see terrible images of those suffering from malnourishment. And just as we go into our festive season, a time traditionally of joy, hope and goodwill, I’m sure all of us would want to spare a thought and make a contribution to alleviate some of the suffering.”

You obviously work closely with Robbie Williams - what’s his involvement with UNICEF and this campaign?

“Robbie has been the music industry ambassador for UNICEF since 2000 and he has been very closely involved with the charity since. His most notable contribution, of course, was and is Soccer Aid, which has raised over £30 million since 2006, this is a truly remarkable achievement. He happily made his album, Take the Crown, available for the campaign and has helped with the messaging.”

City Of Hope shows what the music industry can do for a good cause in the US. Would you like to see the UK industry really get behind the work of UNICEF?

“I have been a vice president of UNICEF since 2002, and I am very proud to have played a small part in Robbie’s work for the charity. ie:music does work with a small group of music industry notables to raise funds and the Blue Vinyl campaign was the brainchild of the UNICEF Music Group. I would very much like the UK industry to get behind the work of UNICEF. Before any of us lent our support, we did our due diligence and we know that more of the money they raise goes to the children that they support than almost any other charity. Theirs is an extraordinary record.”

To enter any of the prize draws for the UNICEF Blue Vinyl albums head to www.givergy.com before 10pm on December 10. The full list is below: