'They're the the only thing I care about': The 1975's Matthew Healy explains his bond with the fans 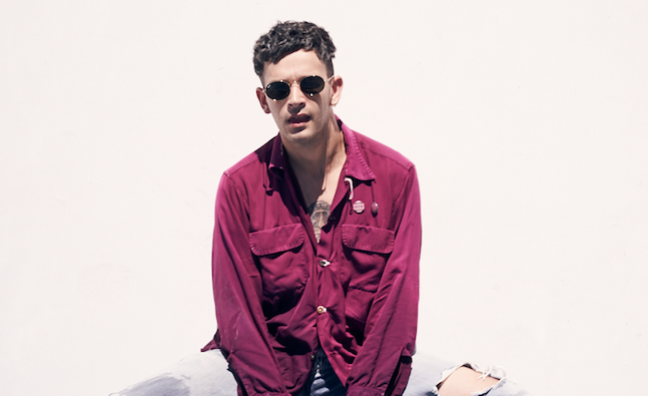 Matthew Healy of The 1975 has described the band’s fans as “the air in the lungs of the band”.

Healy, frontman for the Manchester quartet, was speaking to Music Week for our bumper Q4 special issue, out now, after we visited the band and their manager, Dirty Hit boss Jamie Oborne, at their Los Angeles studio.

The 1975 are preparing for one of the most anticipated comebacks of the year, with third album A Brief Inquiry Into Online Relationships due on November 30. They will follow it in the spring with Notes On A Conditional Form.

Reflecting on inviting fans to appear in the video for recent single Tootimetootimetootime, Healy continued: “We didn’t curate it to be a cross section, they all turned up and experienced a scene so happy… It’s the idea of every time I do what I really want [with the band], the reaction that I get back is that it’s made people happy. It’s a really simple exchange.”

With The 1975 preparing for the release of two records and an arena tour, the singer is eager to give back to the fans now the band is back in cycle.

“The fans are the only thing I care about,” he said. “It’s the air in the lungs of the band, that’s what we’ve always said. It’s really simple for me; I don’t need that much to explain to me why it’s amazing. If you threw a party in your hometown and 50 people come it feels amazing, do that in Denver, Colorado and 10,000 people come, it’s fucking amazing. The idea of doing it for them and for that is obvious.”

Addressing the strength of the bond between the band and their fans, Healy stressed the importance of “remembering the ratio of intensity”.

“I’ve always had that level of intensity and I don’t take it lightly. I’m not a cool guy, somebody who wants to perceived like they don’t care so they don’t get judged,” he added. “I care, I love that they care, let’s keep this exchange going. That’s why I do it.”

Healy and Oborne also addressed the subject of ticket pricing and paid meet and greet sessions, vowing that they would always act in their fans’ best interests.

“With paid meet and greets, when you monetise the final thing left, the one thing that actually gets them through the door, the personal connection… It’s messed up,” said Healy.

Oborne revealed that The 1975 have “turned down extraordinary amounts of money to do that,” saying, “it’s not something the band’s ethics will allow them to do”.

“We just can’t do it, it’s the opposite of what we’re trying to do,” he said. “It’s exclusionary. And that’s not rock’n’roll, I’m talking about the spirit of creation, that is not it, is it? It’s not about paying a thousand dollars to get a selfie with someone when you’re not allowed to touch them.”

“Treat people how you want to be treated, he said. “If you don’t want to be exploited, don’t be exploitative. If you want to have a better business, make your show better. You know how you make fans come to your shows? Tell them it’s not going to cost five grand for the next level of show that this person can’t afford but this one can because their dad is richer. It’s bullshit.”

Read the full interview with Healy and Oborne in the brand new issue of Music Week, out now. Subscribers can read it online here.

Look out for much more on The 1975 on musicweek.com this week.