'This is a very important album': Team Bocelli on the tenor's big comeback 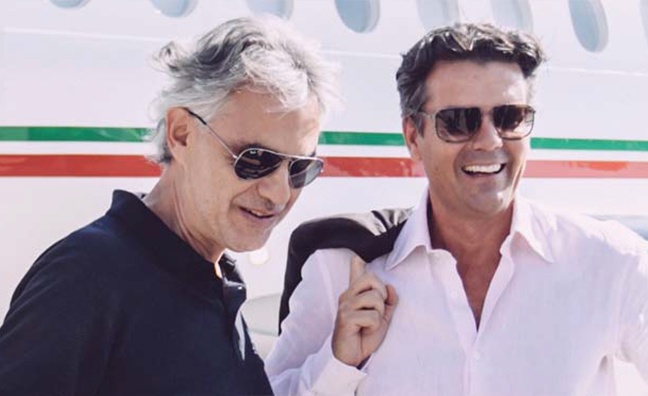 Andrea Bocelli’s first album of new material in 14 years is heading for No.1, according the Midweek Charts flash. Si (Sugar/Decca) was released on Friday (October 26) ahead of the Italian tenor’s two sold-out dates at The O2 this week (Nov 2-3).

Bocelli’s 2015 album, Cinema, peaked at No.3 and has sales to date of 177,609, according to the Official Charts Company. Si would mark his first UK chart-topper and a great result for Decca after Rod Stewart's No.1 - if it can hold off A Star Is Born. International agent Andrea Primicerio (pictured with Bocelli), of Klassics Music Management, speaks about the “one of a kind” artist in the latest issue of Music Week. Here, Primicerio takes us inside the global campaign…

What are you ambitions globally for Andrea Bocelli on this record?

“This is a very important album. It’s the first of many years where Andrea has come out with previously unpublished songs and we are all very excited. Sometimes it’s a little bit difficult when the audience hears new music but we also feel there is a lot of excitement. We hope it will be well received and that it will do well in week one.”

He’s been a largely physical format artist. Can he perform strongly on streaming platforms?

“I think so. Obviously we’re a little bit slow out of the box in regards to digital. Our fans loved CDs, obviously they love to listen to music in their cars, so the shift has been a little bit slower if you compare it with some younger artists. But we saw a massive increase in digital downloads. Now with a couple of things on YouTube, we’ve seen a lot of streaming there. We are excited to see that things are moving. Unfortunately, sometimes you don’t get the sound quality [on streaming] for the music that Andrea plays. But the more people we can reach in any way whatsoever, the happier we are.”

You’ve worked closely with him for 15 years. How did the team get him to this superstar status?

“It’s amazing. Obviously Andrea is one of a kind. There has been a massive teamwork with all his family, because you know his wife Veronica [Berti] is the manager, and we’ve had in the last year or two some help from the guys at Maverick. Andrea is an artist that can really make a difference when he plays live. We’ve gone from strength to strength in many markets, and that carries quite a lot of natural promotion. In terms of his career, he’s peaking and it doesn’t look like it’s slowing down. What's happening in the industry is that live appearances are becoming more and more important - also that is where the money is. Andrea does particularly well with live audiences. We are very lucky that way."

And your strategy has been to partner with local promoters depending on the market, rather than one global partner?

“Yeah, that’s the key. We have [promoters] in each market, people who have become friends, and who we work with throughout the year, even when a concert is not on. So they actually help us with PR and to stay connected with the market even if they don’t have a live concert, because they know we will come back to them when the time comes. This has been an interesting concept that has worked quite nicely.”

Are you glad to be playing The O2 around album release?

“Absolutely. I think it’s a good strategy. It’s a great time because it means the artist can promote the album and there is a great buzz about it. If anything we should have done more shows because we sold them out. Harvey [Goldsmith, co-promoter with Kilimanjaro] has been calling me to add a third show.”

To read the full story on Andrea Bocelli’s big comeback pick up the latest issue - or subscribers can click here. To subscribe and never miss a big industry story click here.