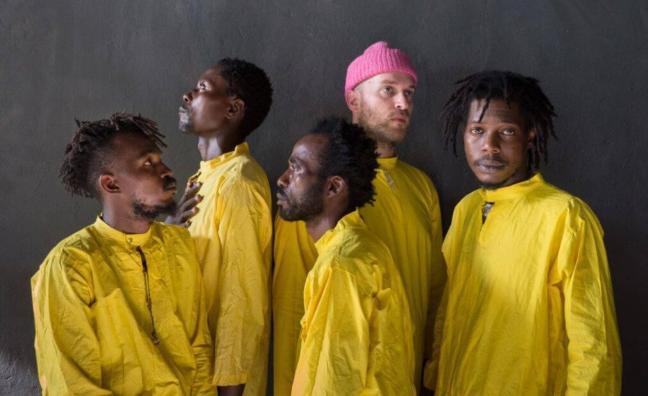 Transgressive Records has today (November 20) announced the signing of Kokoko!, a new collective from the Kinshasa in the Democratic Republic Of Congo.

The group have shared a new video for Azo Toke, which you can watch below, and will release the Liboso EP on December 7. They will play All Points East festival alongside Bon Iver next summer.

The Azo Toke video was directed by Renaud Barret, and the band issued the following statement about it.

“Shot in Kinshasa, Azo Toke features Makara’s dancers Makoka and Douglas from the Lingwala neighbourhood. The direct sound of Azo Toke is translated visually through lo-fi analogue treatment, combined with HD detail precision, to bridge two worlds together. Reality vs imagination. Raw vs clean. With its rhythmic edit, psychedelic moments and theatrical dance performance, the video gives a breathtaking, forward driving sensation, translating the sounds from the contact of a thumb on an audio wire, a radio between two stations used as a snare, rolling claps, and an electric Likembe -  all leading toward a third dimension where Kokoko! exists.”

Kokoko! have previously toured Europe and have played festivals including Roskilde, Sonar and Nos Alive. Time magazine, Pitchfork and Resident Advisor are among the titles to have covered the group in the music press.

Further tour dates are to be announced and Kokoko! will release their debut album through Transgressive in the summer of 2019.

The Liboso EP will be released digitally, on CD and limited edition test pressing vinyl. The tracklisting is as follows: