Unfinished monkey business: The inside story of the Gorillaz comeback 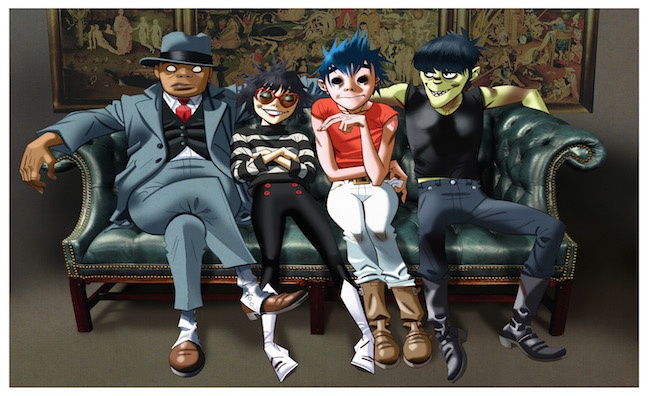 Today, Gorillaz release their long-awaited comeback album, Humanz (Parlophone). It’s been seven long years since Damon Albarn and Jamie Hewlett’s last put anything out, although they did release two records in rapid succession: Plastic Beach and its low-key follow-up, The Fall.

Since then, the musical landscape has completely changed and the technology that Gorillaz always utilise in their campaigns has been notably upgraded. But the band have still attracted a stellar castlist of collaborators, including Pusha T and Rag’N’Bone Man and scored the biggest Virtual Reality video debut of all time when Saturnz Barz dropped on YouTube. They also made a star-studded live comeback with Albarn’s one-time Britpop adversary, Noel Gallagher, and announced ambitious plans for a one-day festival in Margate’s Dreamland.

So, after he told this week’s issue of Music Week that he expects the band to be as successful as ever, we sat down with Parlophone chairman Miles Leonard to discuss today’s most hotly-anticipated release…

How did the band get back together?
Damon is so chameleon-like; he has numerous projects and creative outlets and always transcends from one to another. After the last Gorillaz album, there was a great deal of touring throughout the US and then there was a natural break, that's been well-publicised between Damon and Jamie. Time had gone by and he'd been involved in numerous projects, the Blur album, Alison In Wonderland and many other things, so now just felt like a creative time for Damon and Jamie to get back together. Time is a wonderful thing to bring back innovation and the creative energy that they had right at the very beginning. A seven-year gap might feel like a very long time, especially in today's marketplace, but it's really important that Gorillaz is always about both Damon Albarn and Jamie Hewlett. It's the sum of the parts that makes it what it is. So when these two great forces came back together and said, We're making a new Gorillaz record and all the tools and animation that goes along with that, that's a really exciting moment for us, because we know they're coming back for the right reasons. They’re not just rolling into another album cycle. It's because they've got something to say visually and through their music.

The live comeback at London’s Printworks was quite a show…
That was a great night. What I loved about that night is, it had that classic old warehouse rave feel, going into the depths of Surrey Quays. With the new band and the featured artists playing essentially their first show, I thought it was quite extraordinary. The band was as tight as it could be, a lot of people hearing those songs for the first time came away talking about how exciting it was, not only having a lot of the features there, but how great it sounded delivering that live for the first time. It had a special, Were you there? moment.

There’s a very impressive list of collaborators on this album…
It's a pretty diverse record! Right now, Damon and Jamie are at their most creative in what they bring to it. Pop music has been hugely innovative and exciting over the last five, six, seven years, that's where the biggest innovation has come from. But the problem right now is it's on a pivot, we're starting to see tired formulas creeping back into pop music, which is always a sign of fatigue. It's the bold and the brave that stand up and stand out and the Gorillaz fit in that space, with the landscape being as open as it is today. It's never been more open and free and flexible than in the last 12-18 months when [it comes to] creating and releasing music. Gorillaz are the one act that's always been there to break the rules of convention.

Is it difficult to pull all the collaborations together?
You know what, it's not, really. The great thing is, between label and management and Damon himself approaching these featured artists, the one thing we've found is the love of Gorillaz. The one thing Damon would never do is put a feature on a record for the sake of a feature. He'd only want to have somebody involved in the record and featured if they wanted to be involved on a creative level and understood where Damon was trying to take the project. He gives those artists a lot of freedom. They're not featured artists that come in and are told, You're going to sing eight bars here and thank you very much. He gives them that open space and says, I want you to be involved with Gorillaz because you excite me with what you are as an artist in your own right. That's why we got the best out of these artists.

The visuals and technology are almost as important to Gorillaz as the music. Is that interesting to be involved with as a label?
Technology and software has caught up with Gorillaz. I was there at the very beginning of Gorillaz and I remember very well the most innovative thing we could do in the digital world was an exciting website, Kong's Studios. And that was ground-breaking at the time. It was the real go-to place for those Gorillaz fans. Remember they're fans of music, tech, animation and it's the breadth of people that get drawn in to Gorillaz for many reasons. Look where we are now in terms of tech and it's all catching up. Both the visual platforms and technology that we can utilise bring Gorillaz to life more than ever. We were being ahead of the curve at the [2006] Grammys when we had the holograms but it was quite primitive technology. That was really trying to push the boundaries and use the visual aspect that Gorillaz can bring. Now there's this abundance of directions that we can travel with and merge Gorillaz into, which is what they were always meant to be about, we just never had the opportunity.

Streaming wasn’t a thing last time around – can they fit into that world?
I really think so. We released four tracks on the same day because there's diversity within the album and we really wanted to show that. Because there wasn't, in my view, one track that said, This is what this album is about. So we released four and we're already up to just shy of 35m streams across those four tracks. Across all streaming platforms they've connected with that audience, and that's only going to increase and grow as we move through the campaign.