'Vinyl triggers something in people': Dave Stewart travels down memory lane as Eurythmics reissues are released 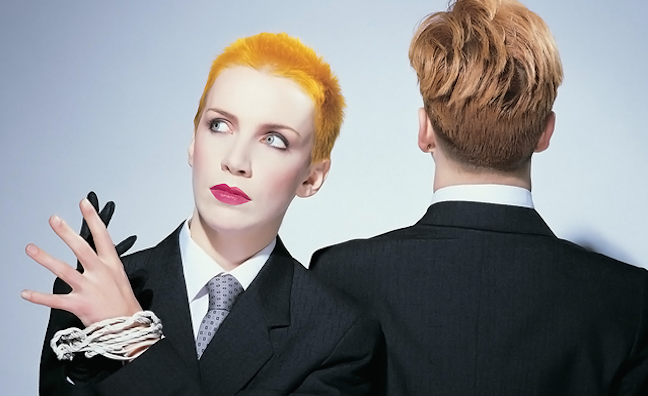 Today marks the end of a frustrating period for Dave Stewart of Eurythmics.

Stewart, who founded the legendary group with Annie Lennox in 1980 and went on to sell more than 80 million albums worldwide, has long been perplexed at the lack of attention paid to the band’s catalogue. But no more.

It marks the first time Peace has been made available on wax, as the original release was available on CD and cassette only. The re-releases will feature original artwork, illustrations and liner notes, and both Lennox and Stewart have spoken with excitement about the sound quality.

Stewart knows more about that than perhaps anyone, as Music Week found out when we sat down with the producer for a chat about the re-releases. Read on to find out how they came together, and how deciphering Stewart’s handwriting was half the battle…

What has the process of putting these reissues together been like?

It’s been a six month to and fro from archives, to lost masters, to tapes being found and artwork… We were trying to make sure it was the exact vinyl and album cover that was released back then. Finding all those tapes and ones that hadn’t been remastered and all that kind of stuff was [difficult]. Some of them, like Sweet Dreams, the master would have been mixed from our desk and eight-track onto a Revox reel-to-reel. It was funny, we won an Ampex Golden Reel Award, and it was literally made with the cheapest gear you could find. I think I stole the Revox from the offices of Island who signed me when I was a kid! It really wasn’t a high-end recording!

How did you go about locating the tapes then?

We had to find tapes [with labels] that were handwritten. You know when you come out of a proper studio and it’s all typed up? Ours were just scribbled! It’s mainly my hand scribble that only I could read. So people were taking photographs in archive rooms and sending them to me and asking, ‘What does this say?’. I’d have to think back 35 years and go, ‘Oh yeah, shit, hang on…’ We’d rename the songs at the last minute, so the tape would say something like ‘Angels Flying’, but it could be ‘I’ve Got An Angel’ or something [different].

What do you think these records mean to Eurythmics fans?

It’s for the people who were at our shows and were real fans. I know from launching the Eurythmics Facebook, I was doing it myself and you get a million people [commenting on] everything you put up there. They all say ‘When are you going to tour?’. They’ll buy [the reissues] but it always comes up, ‘When are you and Annie going to play together again? Can I buy tickets?” I know for a fact that bands when you saw as a 17, 18, 19 or 20-year-old, 25 years later when that band is coming to town you’re more likely to pick that than a brand new band. If you love Depeche Mode, you go, ‘Fucking hell! Depeche Mode are coming to Mexico City,’ you know? Music really does resonate with everything about people at a certain time and place, so that’s probably the reason why it’s a good idea. The vinyl does trigger something in people to say, ‘Oh my God, I bought that when I was at college and I took it home and played it to my mum and dad and they said, ‘What the hell is this?’. My dad would say the same thing, he always sang Frank Sinatra and Dean Martin and all that stuff, he just didn’t understand Sweet Dreams, like it was almost hurting him when it came on the speakers!

Is it good for the music industry to acknowledge catalogue and reissue old records?

Oh yes. Basically, I was getting more and more frustrated that Eurythmics had the worst exploited or looked at catalogue ever. We had one Greatest Hits in and then an Ultimate Collection, which was virtually the same thing. We made a box set called Boxed and it literally was boxed – they didn’t release it anywhere apart from in England, only about 2,00 box sets. Quickly, the label turned it into an ultimate collection of one CD. So that’s all we’ve ever had, which is pretty mad in 35 years.