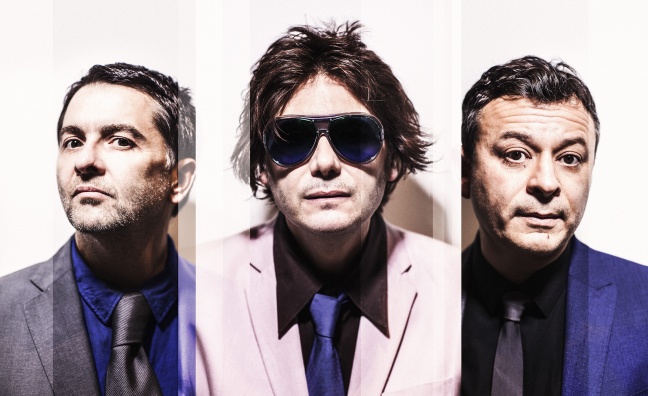 This week's coverstars release their 13th LP Resistance Is Futile via Sony/Columbia on April 13, preceded by the singles International Blue, Distant Colours and Dylan & Caitlin.

"We feel really great about the record," said Wire. "We feel we've made, for a band approaching their 50s, a really vital, uplifting album full of love and dedication."

Although it is their first LP since 2014’s Futurology (50,066 UK sales - OCC), the band have remained active, embarking on 20th anniversary tours of their twin '90s classics, The Holy Bible and Everything Must Go, playing numerous festival dates and penning the Welsh football team's 2016 anthem Together Stronger (C'mon Wales).

“Futurology was such a high concept, dense album - and it was so well received," added Wire. "We didn't want to repeat that because we didn't think it would be as good stylistically, so it did take a while before we sat in a room together and started to realise the way to go."

Here, in part two of our Q&A with Wire, the legendary lyricist looks back on the band's back catalogue and ponders what their future may hold...

How much did you enjoy The Holy Bible and Everything Must Go 20th anniversary tours?

“I really enjoyed Everything Must Go because of the sense of glory attached to the underdog crossing over. The Holy Bible was more of a mental and physical challenge, you don’t really go on stage to have a good time playing it. It’s not so enjoyable, and I mean that in a very respectful way. It’s just more of an emotional challenge because you’re putting yourself back into the body of a 23-year-old who just hates the world. You have to have that state of mind really to play it convincingly, so the challenge was brilliant, but I wouldn’t call it enjoyable.”

Your most successful album, This Is My Truth Tell Me Yours, turns 20 in September; how well do you think that record stands up?

“It’s a really classy album; kind of luxurious and expensive. It still sounds unbelievably well recorded and there’s a lot of depth to the album. Obviously, it’s our biggest seller - I think it’s done 3.5 million to 4m worldwide - and it’s quite a difficult album to sell that many with. So we look back on it with a lot of pride.”

How will you be marking that anniversary – do you plan to tour the album in full?

“We will be playing songs from it. I don’t think we will be doing a full tour but we have started playing some of the lesser-played tracks. I think it will be more in terms of raiding my archives and putting out some sort of anniversary edition. I’ve got mountains of stuff - a Tsunami demo, in particular, is probably better than the final version, it’s really fast and in your face, so it should be interesting.”

What about a No.1 album? It’s surprising that This Is My Truth is your only chart-topper…

“It is surprising. I think we’ve had four No.2 albums: Everything Must Go, Know Your Enemy, Send Away The Tigers and Futurology. Sometimes you just pick unlucky weeks. Everything Must Go went on to sell a million in the UK - I think George Michael had a record out [Older] the week it came out.”

Of course, Send Away The Tigers lost out to Arctic Monkeys’ Favourite Worst Nightmare in 2007 by just a few hundred copies…

“Exactly, 462 or something [Wikipedia suggests it was 690]. Ed Sheeran beat us on Futurology, obviously that was by a lot more, but it’s just the way it goes sometimes.”

This Is My Truth sold more than one million copies in the UK but was followed by 2001's less commercial Know Your Enemy (219,991 sales - OCC), which dented your mainstream popularity. Do you have any regrets about that?

“The whole thing was a reaction to This Is My Truth being so big. A lot of bands get to that point where they react against what made them huge. [Know Your Enemy] is such a sketchy record, there are moments on it that I truly love, but we weren’t at our most disciplined, we were quite lazy on it. And then to spend all the money going to Cuba and launching it there, I do wonder how we got away with it!”

Did you expect Know Your Enemy to shed quite so many casual fans?

“I think we were deluded at that point to think that we could still convert people, which was mad because it’s such a difficult record to comprehend what we’re on about. I put a lot of effort into the words on that album - too much effort - a track like The Convalescent is like a mini short story."

Over the past decade or so it feels like you've been on the most consistent run of your career - would you agree with that?

"I actually would because there were a few odd ones in the first 10 or 15 years. But it's been pretty amazing  from [acclaimed 2007 comeback album] Send Away The Tigers to here."

And what about the future - can you foresee a time when you're no longer in the Manic Street Preachers?

"It's hard to think like that, but there's going to come a time. We used to work in five-year plans, cycles of ambition, but it is impossible for any band to do that these days. As much as anything, I don't know if anything that we do will exist [in the long term]. We'll just be swamped into one of the giant tech companies that owns every part of your life and I just don't know if we'll ever fit into that. So many of our pre-orders for the new record are physical, it's unreal. How long can we sustain that?"

Revisit part one of our Q&A with Wire here.