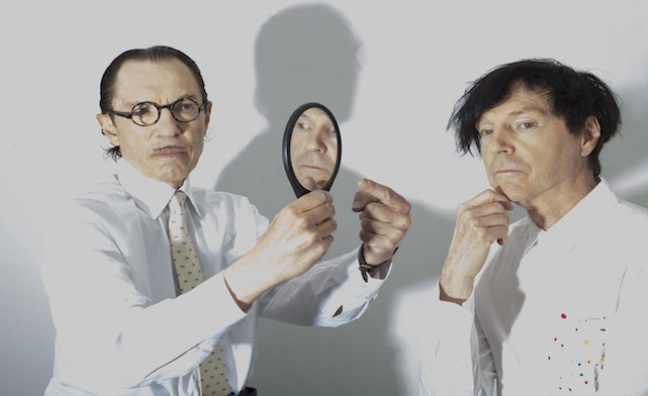 Following the band’s widely lauded collaboration with Franz Ferdinand – the perfectly titled FFS (2015) – and their radio musical The Seduction Of Ingmar Bergman, Sparks are here today to talk about Hippopotamus (which was released September 8), the first bona fide Sparks album since 2008’s Exotic Creatures Of The Deep. It is also the first to be released through new label BMG.

Joyously playful and stacked to the rafters with deliciously ‘Sparksy’ song titles (see Edith Piaf (Said It Better Than Me), So Tell Me Mrs Lincoln Aside From That How Was The Play and Life With The Macbeths) Hippopotamus is Sparks boiled down to their purest form: inescapably catchy pop buoyed by lyrics and one liners that continue to jump out and surprise you dozens of listens in.

For the Maels, the record reignited the pair’s desire to get back on the road and start making “pure” Sparks records again.

“We felt fresh again; feeling like wanting to prove a point that we are still capable of doing something really exciting and forward-thinking but being a pure Sparks album,” explains Russell. “We wanted to put everything we had into it because we haven’t had, what purists would say, a real Sparks album in quite a few years.”

“Being on-stage with FFS was such an amazing experience,” adds Ron. “We didn’t record the album just so we could tour but that definitely is a good by product of it.”

Evidently excited about returning to their roots with Hippopotamus, the pair are adamant that the frequent collaborations and undertakings of extra-curricular projects has been vital in keeping their sound fresh over the past 45 years.

“You can get in ruts, so working in different ways makes you see things in a different way,” says Ron. “We used some orchestral things within songs that came from movie things – we’ll try to insert that into a three or four-minute pop song.”

With an aesthetic as instantly recognisable as their sound, the pair remain resolutely “old-fashioned” when it comes to the importance of image and creating a representative body of work – something they feel is being lost in today’s streaming age.

“Personality is such an important thing and that’s always been conveyed by artwork on an LP – obviously that’s coming back a little bit,” Ron states. “It seems that there are so many competing pressures for people’s attention now that even focusing on a whole album is difficult for a lot of people. We are old fashioned in that we think an album is something that should be listened to in its entirety and that makes sense all together.”

Russell adds: “We’re really excited about the new album cover and we just cant wait to see the vinyl. There is going to be an LP version that is big and there will be pictures discs. We still feel all that stuff is really important. We’re also going to have a cassette version of it – you’ve got to have a cassette version even though you can’t possibly play it! It’s just cool having those things and we are really happy wit BMG that they are embracing and encouraging all those things that we think are really important. Coolness is important.”

We wanted to put everything we had into it because we haven’t had, what purists would say, a real Sparks album in quite a few years.

Released via the recorded music arm of BMG, the band claim they found the “perfect” label for Hippopotamus, while the company’s EVP international artists, Alistair Norbury, insists there was no hesitation in adding Sparks to its roster when the opportunity presented itself.

“The uniqueness and unpredictability is what makes the band so iconic and, frankly, much needed,” he told Music Week. “There is no risk in working with artists who have consistently delivered ground-breaking music and are so willing to support the release by promotion and touring. We completely trusted Ron and Russell to deliver outstanding music and the resulting album exceeded our expectations.”

“There’s no big secret, we simply refuse to adopt the standard industry approach that somehow established acts are less worthy or exciting than newer artists,” he continued. “I am surprised by the lack of respect often given to artists who have sold literally millions of records. Our aim is to do what’s right for the artist whatever stage of their career they are at.”

As we prepare to bid farewell to the brothers Mael, Ron offers an equally complimentary summation of the partnership between band and label.

“The direction of the label was so perfect for our situation – a band who has some history but is still doing something that they feel is modern,” he concludes. “We usually try to stay out of associations with record companies but they have been so amazing. Everybody we’ve been associated with is so sharp. When you do an album you don’t want to blow it and they’re seeing it in the same terms we are. We couldn’t be happier.”