'We had a fantastic time making this record': James frontman Tim Booth on Living In Extraordinary Times 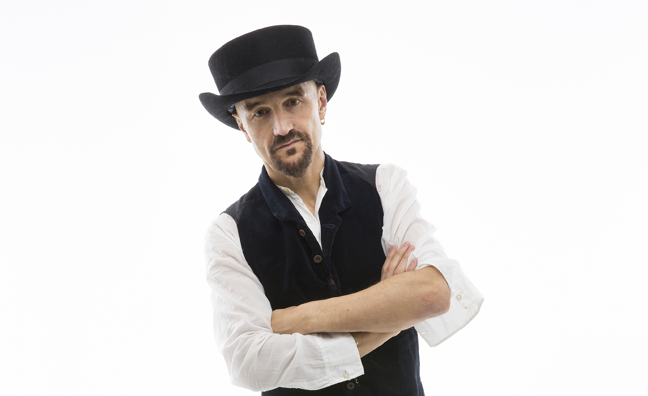 James frontman Tim Booth has told Music Week he believes the band's new album is one of the finest of their entire career.

Living In Extraordinary Times, the band's 15th studio LP, is out today via BMG. It follows four track EP Better Than That, which dropped in May.

"This album is one of the best we've ever made," said Booth. "We didn't know which songs to leave off and we had a big fight over it because we made too many.

"We had about 15 songs and we didn't want to put them all on, that's why we released an EP, but those songs on the EP were some people's favourite songs in the band. We've made something very fresh and exciting."

Both releases were produced by BRIT Award-winning producer Charlie Andrew.

"I'd been in contact with Charlie after he made the first Alt-J record because I thought that was genius," revealed Booth. "I thought that record was as fresh sounding as OK Computer was when it was first made and I wanted to work with this man.

"We worked with Charlie and a young unknown producer called Beni Giles who we'd brought in before Charlie had come on board and asked to really fuck up our songs a bit more - to mess around with the rhythms and make them more unpredictable - because we write to a drum machine so our rhythms are fairly open for whoever wants to step in and damage them.

"Then Charlie said he'd love to produce the album so we took Beni to meet Charlie and they worked together brilliantly. We had a fantastic time making this record."

"We went to Brian and said, 'There's something not quite right with this song, we're missing something,'" explained Booth. "We called it Coming Home Pt.2 because it seemed to be literally a sequel to Come Home. Come Home was motivated a lot from the shame of me feeling that I was away from my family too much. Coming Home Pt.2 is about my second son and my first son.

"Having Charlie and Benny working on the album with us reminded us of working with Brian in that you just didn't know what was going to happen from day-to-day.

This album is one of the best we've ever made. We didn't know which songs to leave off and we had a big fight over it because we made too many

"We've been touring it and the reaction to it live has been incredible. There's one song in particular called Many Faces where people in front of us have burst into tears when we've played it. We toured Sit Down about a year and a half before we recorded it and even that didn't get as strong a reaction as Many Faces is immediately getting. So we have been getting a strong sense of what we've written already from our live shows."

The new album is the follow-up to 2016's Girl At The End Of The Road, which reached No.2 and has shifted 42,952 copies to date in the UK according to the Official Charts Company. both produced by Charlie Andrew (Alt-J, Wolf Alice). Their biggest-seller is their triple platinum 1998 compilation The Best Of, which has moved 910,424 units.

Click here to read Music Week's recent interview with Booth for The Aftershow.