'We need more women at the forefront of the industry': Carla Marie Williams and Lily Allen on the biz's gender imbalance 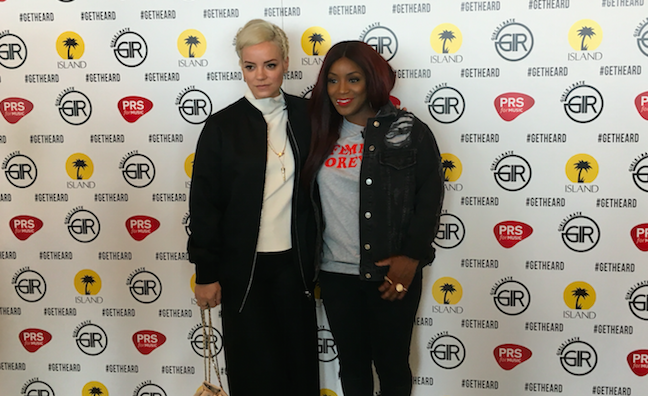 UK star Lily Allen and acclaimed songwriter Carla Marie Williams have spoken to Music Week about the lack of female songwriters and producers working in the industry and how the Girls I Rate Get Heard initiative is aiming to bring more women to the fore.

On Saturday (May 6), a raft of leading A&R executives and aspiring female songwriters and producers gathered at PRS For Music’s Kings Cross HQ for the Girls I Rate Get Heard showcase event. Held in partnership with PRS For Music and Island records, the day saw 100 women aged between 16-30 present their original work to some of the industry’s most influential figures.

Hosted by Beyonce songwriter and Girls I Rate founder Marie Williams and Allen, the event also served to highlight lack of women currently among the PRS membership (16%), as well as to enable the brightest young female songwriters to showcase their talent.

Speaking to Music Week, Marie Williams outlined her vision for the Girls I Rate organisation and explained why such events are so important.

“I want to encourage more women to come to the forefront and to give them a platform to get heard. [With this event] we try to focus on giving them a lot of positive feedback. It gives them hope that they can be heard by people of that calibre And we want PRS For Music’s female membership to increase. I expressed my concern to PRS that their female membership was really low and they really wanted to get involved.

For Allen, initiatives like Get Heard are an example of the changing industry landscape.

“Over the last four or five years it feels like women are standing up for themselves and being encouraged to stand up for themselves more,” she told Music Week at the event.. “When I first started, the only girls around were me, Amy Winehouse and Kate Nash; it was boys and bands like The Libertines in the charts. But once females started dominating the charts, like they have over the past 10 years, our voices have become collectively more powerful.

“Also, when I first started, it felt to me like there was a culture of women being pitted against each other,” Allen continued. “I didn’t feel like there were a lot of opportunities to be supportive or be supported. It seems like that tide is changing and it’s a really beautiful and brilliant thing.”

Following Saturday's Get Heard showcase, 10 attendees will be given the chance to attend a Girls I Rate Academy Weekender. Each Academy Weekender will be run by industry experts, providing educational and practical lessons on how to succeed in the music industry.

Karen Buse, executive director of membership and international at PRS For Music, said: “Girls I Rate is an exciting and much-needed initiative, and I am proud that PRS for Music will be hosting the #GetHeard Weekender. So many young women can be put off entering what often feels like a male-dominated industry, so it’s invaluable to have organisations such as Girls I Rate to break down stereotypes and really support and champion new talent.”

lsland Records president Darcus Beese also added: “It has always been important for us at Island to champion women in all areas of the industry; from the incredible artists we have worked with over the years including Amy Winehouse and PJ Harvey, to the powerful women in key positions at the label. Girls I Rate is a fantastic initiative that we need to be a part of. At a time where the music industry is experiencing growth again, we need more open discussions like #GETHEARD to continue striving for equality and diversity every day. We still have a lot of work to do.”