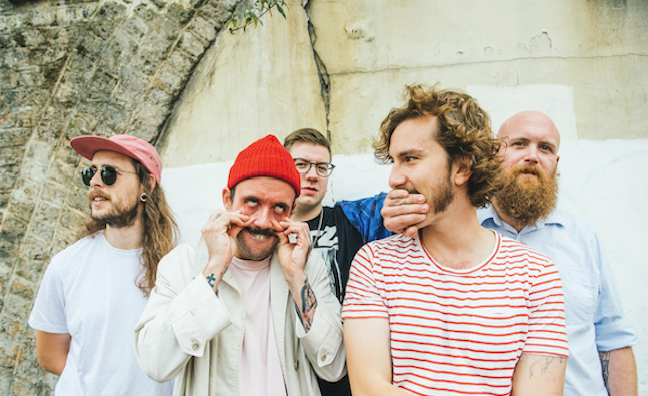 It’s been a big week for Idles so far, what with an AIM Awards win and a Top 5 Midweek position for their second album Joy As An Act Of Resistance.

The Bristol fivesome were nominated in four categories at last night’s AIM bash, triumphing in the Hardest Working Group Or Artist section. As singer Joe Talbot and manager Mark Bent outline in the new issue of Music Week, out now, Idles have worked extremely hard to get to this stage.

“I was so frustrated for so long because no one was helping or opening doors and it got to a point where I didn’t know if people were starting to feel sorry for me, coming back year in, year out trying to plug this band,” Bent told us.

Talbot meanwhile, said our interview underlined the graft that’s gone into the project, which is being steered by Bent, his sister Natasha, the band’s agent at Coda, and Partisan Records.

“It highlights how grateful we are to Mark and how much hard work he’s done, it’s fucking insane,” Talbot said. “I try to explain to the boys just how many hours a day he’s put into us, the magnitude of what he does. I think Lee nearly shat himself when he realised how much work goes into it, it’s a beautiful time.”

Now that the work is paying off, though, what do Idles make of the notion that they may be fashionable? After all, a lot of people are talking about them. Here, in an exclusive extract from our conversation, is what happened when we put the idea to Talbot.

“No. It’s an awful word but it’s a very descriptive one and it’s necessary. Its word that I would never use because the problem with being fashionable is that you become unfashionable, that’s a fact, it has to be. But, I don’t know nor do I care, I’m not in the business of thinking of our own art as an alien entity, I’m in the art, I’m in the band, I don’t want to start dislocating myself from us a bunch of artists because then I start thinking about us a brand or a product to sell and that’s not who I am. I’m a person trying to talk about my life. In a sea of music I’m sure we could potentially become fashionable, [but] absolutely not yet, there’s no way that everything that’s going on in popular culture right now has got to do with a bunch of white dudes shouting about trauma with guitars in their hands."

Do you ever stop to think how you might be perceived, though?

“One of the things that we instilled in our camp is we don’t pay attention to our peers and what’s going on around us. We just stick to what we believe in and what we love and what we’re interested in as the way forward and make our own language, start our own party. One day, if it does become fashionable, if someone turns around and says, ‘You’re the most trendy or cool band in the world’ – which is very unlikely and I don’t give a fuck whether it does or not – I’d just embrace that and make sure that we change our narrative. We’re going to constantly evolve, and one thing that Mark and Natasha have instilled in us is to keep moving forward and to not bask in minor glories, but just work hard for what you love. Be mindful of the present, don’t dwell on the past and don’t look too far into the future, just plan for the immediate.”

Subscribers can read the interview in full here.