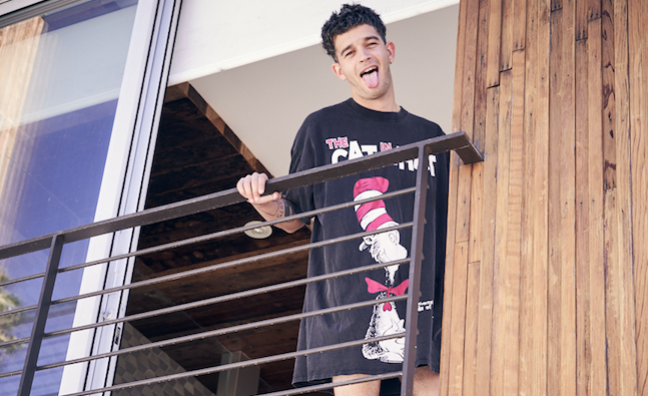 The 1975’s Matthew Healy has told Music Week there’s “no ceiling” to what the band can achieve.

Speaking to Music Week alongside manager Jamie Oborne in Los Angeles for this week’s cover story, Healy looked back on the band’s beginnings in suburban Cheshire.

“We were rehearsing in a garage at my parents’ and it was no bigger than that, apart from the occasional gig where word of mouth had got round,” said the frontman who, together with his bandmates, is preparing for the release of new album A Brief Inquiry Into Online Relationships on November 30.

Oborne travelled north from London to watch them rehearse and said he was struck by “the humanity, the pursuit of four friends making music, it had no agenda, it was joyous and pure”.

Healy was convinced of the band’s talent, even in those early days. “With a lot of bands, you very seldom get a lot of musical ability with a wealth of creative ideas, it’s quite a rare thing,” he said.

“A music school band will play fucking amazing but they probably aren’t going to turn out to be Radiohead. We’d played for so long before Jamie saw us and I remember seeing him react in a way I’d seen kids at shows react.”

After taking the band on as manager through his All On Red company, Oborne set about trying to land The 1975 a record deal. Healy spoke of a troubled period.

The 1975 with no context was a jarring proposition, I understand that

“We were sitting on all of this music I loved and was proud of,” he said. “It was so much who I was by that point, it wasn’t something I did, it was who I was, so when a label would turn up and say it wasn’t good enough it was kind of like I wasn’t good enough. I took it quite hard and Jamie took it slightly more pragmatically.”

This led the pair to form Dirty Hit, who release The 1975’s records in conjunction with Polydor. Their fourth album, Notes On A Conditional Form will follow in the spring.

“I didn’t go on any kind of redemption streak, I thought it was bullshit, I felt I knew better,” said Healy. “I felt that I was representative of the culture, not the other way round.”

The singer said the same genre-defying approach the band had then exists today.

“In the way our records now are kind of all over the place, it was the same then. I was the same as now, all over the place,” he said. “The 1975 with no context was a jarring proposition, I understand that. But it was being met with so much fear and trepidation, kind of the opposite of what we were about. It was a blessing really, and we don’t look back at that time as being that negative.”

Now, Healy believes The 1975 are the ideal band for the era they exist in, describing them as “The perfect band for the zeitgeist.”

Looking ahead to the pair of albums they’re preparing to release and an arena tour, he said there’s no limit to how far they can go.

“The thing with The 1975 is, it’s so generational and I already feel how important we’ve been to a generation of young people,” he said. “I know how that feels and how I feel about those bands that did that for me. I already know that I will be one of those bands.”

The quartet’s last album, 2016’s I Like It When You Sleep, For You Are So Beautiful Yet So Unaware Of It topped the charts in the UK and America and has sold 322,551 copies, according to the Official Charts Company. Chocolate, their biggest-selling single, has 959,173 UK sales.

Oborne told Music Week the band’s appeal is down to “emotional honesty, having the gift of being able to write major keys that lift people without even realising”.

Subscribers can read the full interview online here. Catch up with Matthew Healy’s tribute to The 1975’s fans here.