'We've got our singer back': Lynval Golding on the triumphant return of The Specials 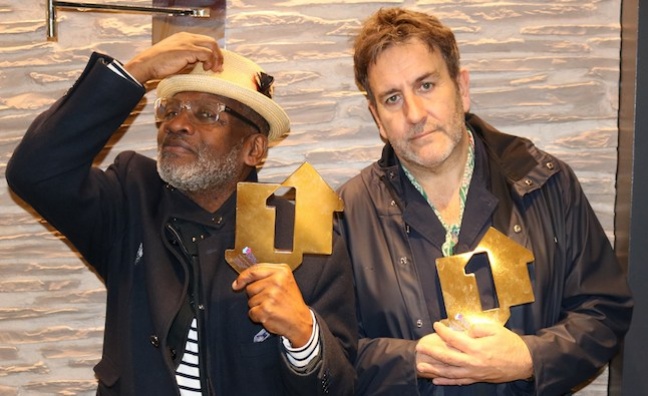 Lynval Golding, The Specials’ guitarist and backing vocalist, has told Music Week that the return of Terry Hall means the band has got its “real voice” again.

Up until they fractured in the early ‘80s, The Specials had a run of hits including the chart-topping Ghost Town. The band returned as a touring act a decade ago but their new album is their first to feature Hall since More Specials in 1980.

“This is a real one because we’ve got our singer back, our real voice, which is Terry Hall,” said Golding in the latest issue. “He’s one of the best writers I’ve ever worked with. When it comes to lyrics, he’s just fantastic. So this is a natural follow-up to More Specials.”

Encore (UMC/Island), which debuted at No.1 last week, is their first to reach the chart summit. It opened with sales of 18,199.

“I’m very pleased with how this record has turned out,” said Golding. “Nikolaj [Torp Larsen], our keyboard player, is an absolute genius. Horace [Panter] is not just the bass player in the band any more, he was there with us writing and producing this record and it’s been a wonderful combination of the four of us.

“We had such a laugh making this record. It might sound like dark subject matter, but we had a wonderful time making it and my band mates are brilliant guys.”

Saffiyah Khan: From EDL viral photo to The Specials https://t.co/RuV0o1LIwK

The politically-charged album includes the single Vote For Me, BLM (Black Lives Matter) and 10 Commandments featuring Saffiyah Khan, who was wearing a Specials T-shirt when she was involved in a memorable stand-off with an EDL protester. Images of the clash in Birmingham went viral.

“She’s just turned 20, wonderful young lady,” said Golding. “This is our 40th anniversary because we released Gangsters in 1979, but the only guest on this record is a 20-year-old, and I thank her Dad for introducing her to music that really inspired her. It’s funny how things work out.

“Just by her having that [Specials] T-shirt on at the EDL rally in Birmingham triggered something – we didn’t know who this girl was, but we had to work with her. She hadn’t been in a studio before, she was nervous to start with but she settled in and did a wonderful job. Saffiyah and Terry worked on those lyrics, but it had to come from her – we couldn’t just write the lyrics for her – and she did a super job. We are just the pillar for her to deliver her message to the youth of today.”

Terry Hall’s one of the best writers I’ve ever worked with - when it comes to lyrics, he’s just fantastic

While sales have been largely physical, Golding welcomed the band’s new streaming audience - but urged them to listen in full rather than sample individual tracks.

“With this record people [need to] listen to the whole album,” he told Music Week. “We’re going through a time with streaming [tracks] but the subject matter on the whole album needs to be discussed and talked about.

“We went in with the idea that we were going to put an album together and each of the songs is going to flow together, it’s conscious planning. We didn’t plan one song, we planned a whole album with all the songs working together as one piece. When it comes to streaming, people will get it more if they listen to the whole album, you know? It just says it all.”

Golding said the band was delighted with the reaction to their return.

“I wouldn’t call this work, it’s being given the opportunity to do something that really I love doing,” he said. “It’s like planting a tree, seeing it blossom and the fruit is so sweet. It’s been wonderful.”