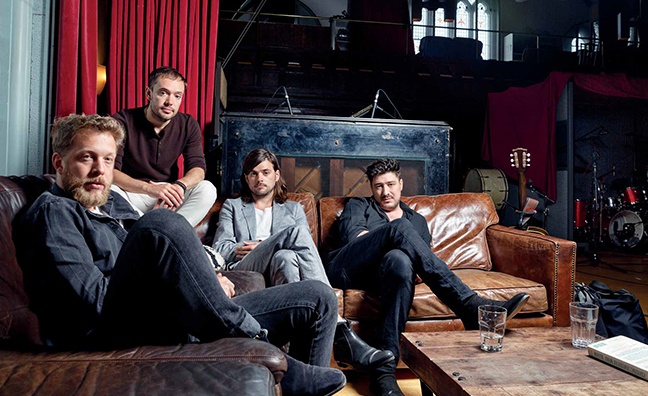 Mumford & Sons have reflected on their success in America as new album Delta remains on track to give them their third US No.1.

The Grammy Award-winning band have previously racked up more than 6.5 million record sales across the pond, hitting the top spot with both Babel (2012) and Wilder Mind (2015).

“We were willing to play a lot of shows, visit radio stations, meet people and spend a lot of time there. Lots of people aren’t,” frontman Marcus Mumford told Music Week. “Honestly, we just never said no to shows in the first few years, we always said yes.”

“We enjoy it – that’s the fundamental,” said bassist Ted Dwane. “We always thought of ourselves as a live band and touring was always very central to our definition of what it meant to be a musician. We garnered a lot of songs from it as well and that shared experience didn’t blow us apart, it cemented us together.”

“We decided from the beginning that we wanted to hit it hard,” noted guitarist and banjoist Winston Marshall. “We worked our fucking arses off and were very lucky that [US label] Glassnote Records really pushed us to radio. That was miracle work in my mind and we owe a hell of a lot to their huge effort. I really think radio is the break we got because that’s how you kill it over there.”

“We’ve all spent time living in America and it was a priority for us because we’re fascinated by that country,” added keyboardist Ben Lovett, who opened 350-capacity venue Omeara in London Bridge in 2017 and is co-founder of label/promoter Communion.

Mumford & Sons, who were forced to reschedule arena tour dates in Liverpool, Cardiff, Sheffield and Manchester this week due to logistical issues, are also set to enter the Top 3 in today's UK albums chart after a three-way battle with Michael Bublé and Little Mix.