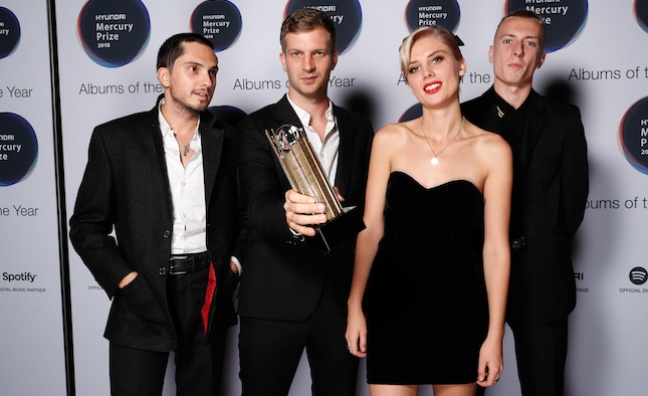 Wolf Alice have won the 2018 Hyundai Mercury Music Prize with Visions Of A Life.

The former nominees were popular winners on the night for their acclaimed sophomore album, which has sales to date of 57,214. Dirty Hit will now be looking to build on the album's sales, as the band continue touring throughout the year. Visions Of A Life has since re-entered the Top 10 in the iTunes chart overnight and is currently sitting at No.7.

"Thank you so much, this means so much to pick this up with my three best friends," said an emotional Ellie Rowsell. Bassist Theo Ellis followed up with a joyous reaction that culminated in him demanding a Jagerbomb to celebrate.

Wolf Alice closed proceedings with Don’t Delete The Kisses. Ahead of the ceremony, Rowsell said it was an “uplifting” selection from their sophomore album. The band had shown their support for the prize by attending the launch event in July and enthusing about "proper albums" by fellow nominees King Krule and Arctic Monkeys. You can read Music Week's full story on Wolf Alice's big comeback record here.

The band were announced as winner live on BBC Four following performances by 10 of the 12 shortlisted acts at the Eventim Apollo. With Lauren Laverne taking a year off, Annie Mac hosted the awards show.

This year’s ceremony took place amid an increasing debate about the future of the album format in the streaming age, with Spotify on board as digital partner. The music industry has united to launch National Album Day next month to shine a light on the format, which has been around for 70 years.

Last year’s winner, Sampha, reached a new peak of No.7 for his debut, Process, following the victory though didn’t quite see the sales boost that many former Mercury albums have enjoyed. Process has sales to date of 50,672, according to the Official Charts Company. But the industry is still backing the prize for the wider benefit it can bring to an artist’s career.

Having returned from the middle of a US tour, Florence + The Machine brought some star power to open the show with an acoustic performance of Hunger. High As Hope is one of the biggest-selling albums on the shortlist with sales to date of 80,707, according to the Official Charts Company - up 43.7% since the nominations in July.

Jorja Smith was also a standout performer on the night with a rendition of Blue Lights from her debut, Lost & Found. The album has sales so far of 41,983, an increase of 38.3%. Nadine Shah’s highly-charged rendition of Out The Way was perhaps the highlight of a strong line-up screened on BBC Four that ranged from the thundering jazz of Sons Of Kemet and bittersweet pop balladry of Lily Allen’s Apples to King Krule’s scuzzy indie and Novelist’s UK rap banger Nov Wait Stop Wait.

But the show lacked a couple of big name performers - neither Arctic Monkeys or Noel Gallagher’s High Flying Birds played at the ceremony. Instead, Alex Turner and co supplied live footage of One Point Perspective, while Gallagher attended the ceremony but didn’t perform. Their albums have the strongest sales among the shortlist, with Tranquility Base Hotel + Casino moving 151,457 units and Who Built The Moon? leading the way with 264,315. In a curious chart twist, Arctic Monkeys’ AM is actually one place higher than the latest record in the Top 40, as a result of the band’s arena tour driving streams of the previous record.

The industry will be waiting to see the effect the awards show has on the winner and other nominees. And it’s now over to the BPI, who have been talking about reimagining the judging process for the future.