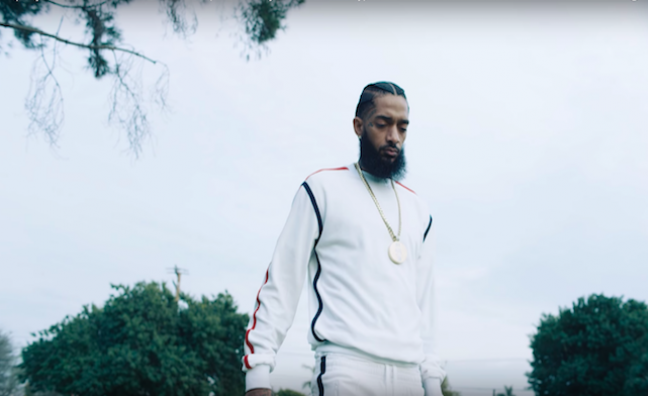 Grammy-nominated LA rapper Nipsey Hussle – real name Ermias Asghedom – was murdered yesterday (March 31). He was one of three people shot outside of his LA fashion store Marathon Clothing – he was 33.

Hussle’s major label debut LP Victory Lap was nominated for Best Rap Album at this year’s ceremony. He had previously released a number of mixtapes, including 2010's The Marathon and 2014's Mailbox Money.

The rapper was signed to Atlantic Records and his own All Money In imprint. Following the news of his death, Atlantic issued the following statement:

“Words cannot express our sadness. Nipsey was not only one of the greatest artists we worked with but an amazing father and leader in his community. One of the kindest and brightest stars in the universe, he was inspiring to all. We will miss him, his music and everything he stood for. Our deepest sympathy, love and prayers go out to his family. May Nipsey Hussle Rest in Peace.”

Tributes have poured in from artists around the world, you can read a selection of them below:

This doesn’t make any sense! My spirit is shaken by this! Dear God may His spirit Rest In Peace and May You grant divine comfort to all his loved ones! ????????????
I’m so sorry this happened to you @nipseyhussle pic.twitter.com/rKZ2agxm2a

Nipsey you a legend. I respect and admire your career path and what you did for the neighborhood. My heart broke today when I saw the news. I’m praying for your loved ones. This was sposed to be the year we got one in. God had bigger plans for you ????????

Fuck. My whole energy is just at a low right now hearing this. We just linked for the first time in years and said we were gonna do a new song this summer cause it had been too long. You were having the best run and I was so happy watching from distance fam nobody ever talks down on your name you were a real one to your people and to the rest of us. I’m only doing this here cause I want the world to know I saw you as a man of respect and a don. Rest easy my g.

RIP Nipsey man. This is tragic

Sad, mad and disappointed about my guy @NipseyHussle

Sad to see you go Nip, I’m only finding peace in knowing you are blessed. As you know, I was honored to share in such an amazing year with you musically. We spoke abt how they let the… https://t.co/DKSuAqKRqw