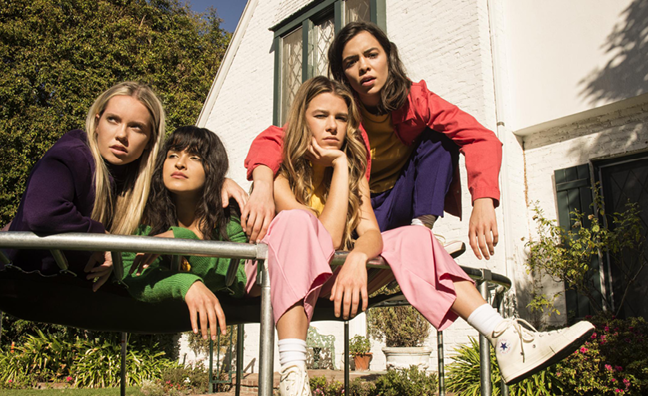 Each week, Music Week's Making Waves column profiles the hottest new names in music. Here, we focus on Utah quartet The Aces. And guess what... they're ace!

WHO: The Aces’ gang comprises singer and guitarist Cristal Ramirez, her drumming sister Alisa, plus their friends McKenna Petty on bass and Katie Henderson on guitar.

WHAT: Crisp percussion, choppy riffs and flawless pop harmonies. The Aces are often compared to a Californian sisterly trio whose name begins with ‘H’ and rhymes with ‘time’…

WHERE: The Aces formed at school in their hometown of Provo, Utah.

Good one. But you’re right. Buzz surrounds The Aces like a swarm of bees congregating at a well-watered flowerbed. This month’s debut LP, When My Heart Felt Volcanic, is full of emotional zingers with titles such as Fake Nice and Bad Love.

Exactly. The Aces don’t mess about with matters of the heart, and that makes them highly relatable. Their increasing throng of devotees is testament to that.

For now, The Aces are on tour in America. But more UK dates are in the works, so don’t worry.