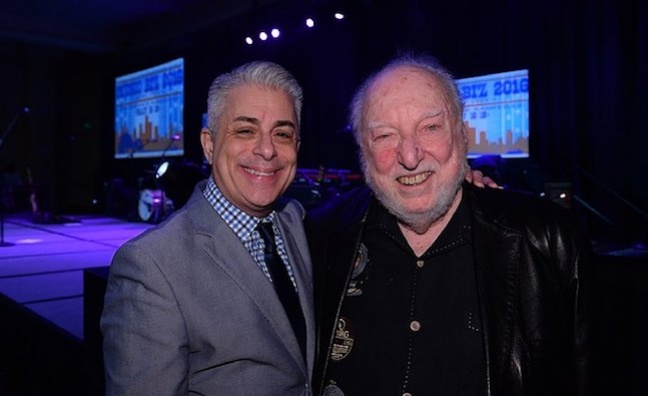 Tributes have been paid to Tower Records founder Russ Solomon, who has died aged 92 in his hometown of Sacramento, California.

Solomon launched Tower Records in Sacramento in 1960, later expanded to San Francisco and, in 1971, opened what would become its famous LA store. Tower gradually established itself as a nationwide chain and became the dominant music retailer in the US from the ‘70s to the ‘90s.

President of the Music Business Association James Donio (pictured, left, with Solomon) said: “Music Biz is extremely saddened to learn of the passing of a true music industry legend and icon, Russ Solomon.”

Tower also had a major international footprint following its launch in Japan in 1979. Its UK presence included a flagship store in London’s Piccadilly Circus. The London stores were sold to Virgin Group in 2003.

Despite becoming a $1 billion a year business in revenue terms at its peak, Tower largely retained the affection of music fans and artists. While Solomon borrowed merchandising techniques from supermarkets, staff were encouraged to order stock based on their knowledge of customers’ tastes rather than use a central supply system

“Our favourite regular was Elton John,” Solomon told Billboard in 2015. “He probably was the best customer we ever had. He was in one of our stores every week, literally, wherever he was — in LA, in Atlanta when he lived in Atlanta, and in New York.”

Donio said: “I am so lucky to have known and worked with Russ during my nearly 30 years here at the Association. Russ was quite outspoken and having a conversation with him about the music business was always a priceless education. He never ceased to amaze me with his unique wit and wisdom. I had actually just spoken with Russ a few days ago about a special tribute we're planning for him at our 60th Anniversary Conference in May, and he planned to be there. Our heartfelt condolences go out to Russ' beloved Patti, his family, friends, colleagues, and all of the music fans around the world who have a special memory of what Tower Records meant to them.”

Tower Records entered bankruptcy in 2004, as a result of debt incurred by rapid expansion, discounting from other retailers and internet piracy. The company assets and website were sold in 2006 and the Tower name lives on as an international franchise and separate online store.

Elton John described the original chain’s closure as “one of the great tragedies of my life”.

Actor Colin Hanks directed a 2015 documentary, All Things Must Pass: The Rise and Fall of Tower Records, which featured Solomon and famous customers.

Tower Records was the spot!!!

Thank you Russ for giving us ALL a home…..a place to explore in and to be turned on in. Ha….lets not forget book covers for school each year!!!

Our thoughts go out to Patti and their family.

The world lost an absolute legend last night. Russ Solomon changed my life; he changed the way I look at the world and how to navigate it. His wit and curiosity was unparalleled. He was, quite simply, one of coolest people I've ever met. It was an honor … https://t.co/LwLJ2qdzan pic.twitter.com/1cZwDiR36d

Russ Solomon of Tower Records has died at 92. This is what his Sunset Strip store was like in 1971. https://t.co/fRhtwowMgc