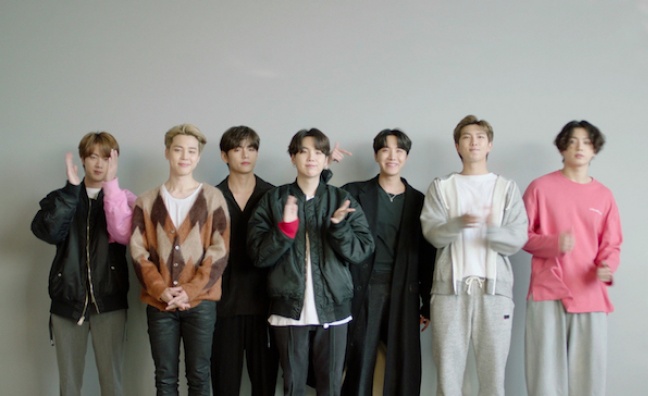 The K-Pop stars took the awards for Best Song, Best Group, Best Virtual Live and Biggest Fans at the event, which was shot from multiple locations due to the Covid-19 pandemic.

Hungary, which had been due to hold this year's awards, has now been announced as the host of the 2021 MTV EMAs.

Little Mix incorporated augmented reality into their performance of Sweet Melody from the immersive "super stadium", appearing from an Incan inspired pyramid, complete with a squad of dancers and contortionists shot in London.

In addition Alicia Keys performed Love Looks Better, which saw the artist and her piano travel through Los Angeles at night, initially donning a studded mask that covered her entire face. Sam Smith performed Diamonds, ending with a call for equality, while DaBaby shed light on the social justice issues at the beginning of his medley.

Doja Cat, who took home the Best New award, opened the show by crawling out of a TV set onto a stage of daisies and grass for her performance Say So. Introduced by Dave Grohl, Yungblud performed a medley of his songs Cotton Candy and Strawberry Lipstick from London’s Roundhouse.

Other performers included Zara Larsson, Jack Harlow and Tate McCrae, while David Guetta, who took home the award for Best Electronic, performed Let’s Love live for the first time with Raye while immersed in an waterfall of lights in the pool of Hungary’s Széchenyi Bath.

DJ Khaled, who was awarded Best Video for his hit Popstar featuring Drake and starring Justin Bieber, introduced two spectacular performances that were shot in Miami - Karol G and Maluma.

The 2020 MTV EMA official pre-game featured performances by Madison Beer, Why Don’t We, and 24kGoldn.

The MTV EMA Generation Change Award returned for a third year, this time to elevate and empower five, fearless women for their powerful work on the frontlines of the fight for racial and social justice across the world. Winners include Kiki Mordi, an investigative journalist fighting to end SARS in Nigeria; Temi Mwale, a racial justice campaigner in the UK; Catherhea Potjanaporn, a portrait photographer in Malaysia; Luiza Brasil, a fashion journalist in Brazil; and Raquel Willis, a Black transgender activist in the US. Each honoree was awarded a one-of-a-kind custom trophy created by Azarra Amoy, a British female artist known for her work in the Black Lives Matter movement in London.

Additionally, MTV celebrated all the local EMA winners from different countries around the globe from Spain to Latin America, to Hungary and Africa for the first time ever with an exclusive MTV International Facebook Live event before the show.

The full list of 2020 MTV EMA winners is below:

Billie Eilish – everything i wanted

Demi Lovato - I Love Me

Jorja Smith – By Any Means