Patreon partners with shesaid.so for the Alternative Power 100 Music List 2021 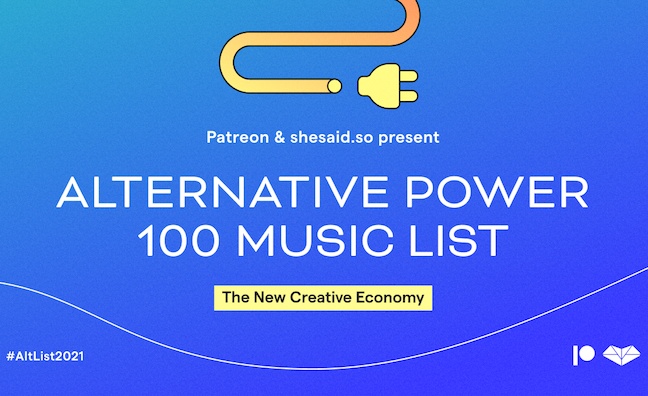 Membership platform for artists and creators, Patreon, has announced its partnership with shesaid.so – a community platform of women and gender minorities created to push forward equity in the music industry.

In this join venture, Patreon and shesaid.so will co-present the Alternative Power 100 Music List 2021, which was created as an alternative to the Billboard Power 100 List, and aims to focus on underrepresented groups, champion all genders, and challenge traditional industry standards. Nominations for this year's list will open in November, with the awards following in December.

The #AltList will focus on a theme of The New Creative Economy and aims to champion the new era of the music industry and those independent creators who are at the forefront of evolving it, from working to develop new ways of artists owning their work to creating community-supported funding.

As part of the partnership, a set of events are due to take place both digitally and physically which will feature panel discussions to discuss music success stories, connect fellow creators, and delve deeper into the theme.

Speaking on the announcement, Patreon’s head of marketing, Europe, Ena Grossteinbeck, said: “We’re thrilled to be partnering with shesaid.so, an organisation that, like Patreon, believes in the value of independent creators and the need to create a world where they can fully thrive. We recognise the daily realities and challenges of our creator community around the world and this partnership demonstrates that they are seen and heard and, most importantly, that we understand them. Ultimately, we want to give those who are underrepresented a vital voice in the music business.”

Founder of shesaid.so, Andreea Magdalina, added: “We want to continue our globally recognised work in empowering those in the music industry and creating a more equitable future. Patreon is a perfect partner for the #AltList and we’re looking forward to working closely together on a number of events where we can explore how to make the new creative economy successful for all at a time when it’s needed most.”

Shesaid.so was founded in 2014, and having built a 12,000-strong community, joined as a Patreon creator in late 2020. The list contains 10 categories including Record Label, Events, Creative, and Community, and will see a Breakthrough Artist award presented for creators on Patreon. Previous honourees include Imogen Heap, Dorothy Hui (Sony Music UK’s SVP of digital & audience development), Jyoty Singh (DJ and radio presenter) and many more.