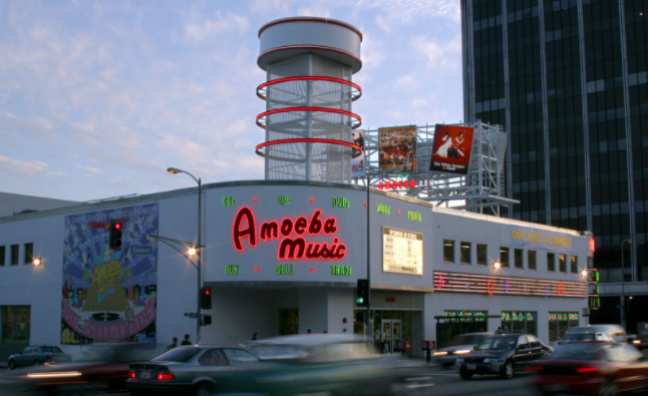 They don’t make record shops like Amoeba Music anymore. In fact, I’m not sure they ever did.

Amoeba is a ramshackle reimagining of what a record shop should have been like in the glory days of the recorded music business. It’s like High Fidelity on steroids. But the UK certainly never had anything quite like this: a sprawling, higgledy-piggledy empire of vinyl, CDs, DVDs, merch, button badges, patches and God knows what else, where an old vinyl copy of Madonna’s debut album (labelled “some wear” – I should hope so too) rubs shoulders with new indie hipster releases and Supergrass “I Am 10” badges going for $8 a pop (annoying, I’m pretty sure I used to have about 10 of these). “Amoeba is a safe place,” says the welcoming sign at the door. It really should point out it’s an amazing one, too.

But the truly impressive thing about Amoeba is not so much that it exists, but where it is situated. It’s right there on Sunset Boulevard, occupying an ostentatious spot on the corner near the golfball shaped Cinerama Theatre and the S.I.R Studios where the MUSEXPO showcases take place, right in the beating heart of Hollywood.

If the US biz took a body blow came when the changing industry landscape shut down the legendary Tower Records on Sunset, symbolising an industry’s decline, then the success of Amoeba is a similar monument to its rebirth.

Here is proof that music retail is alive and well: the shop is open late (really late) every day and nearly always thronged with customers keen to leave with one of its signature carrier bags. There are gnarled old rockers flicking through the Grateful Dead section and emo youths buying Pierce The Veil in jeans so distressed they really should be receiving counselling.  On Record Store Day, the queues extended round block after unfeasibly long LA block. You could lose a day just in its punk rock section. If there’s no MUSEXPO conference coverage today, you’ll know I did.

But it also serves a symbolic purpose. Just as the iconic Capitol Records building a few blocks away tells tourists and locals alike that LA lives and breathes music, so the perpetually bustling Amoeba reminds everyone that paying for that music is resolutely still a thing.

Recently there were rumours that HMV was contemplating moving out of Oxford Street, as close to a Tower On Sunset scenario as the UK is likely to get. Nothing came of it although, in this day and age, regularly reviewing your store portfolio is undoubtedly smart business. Yet it’s not just misty-eyed nostalgia that suggests that, once music retail retreats from the High Street, it would say more than just that the rents are too high.

It would suggest that music can’t compete with all the other options clamouring for the public’s hard-earned rock dollar. Whereas here in LA, Amoeba – a strange combination of music retail’s future and its mythical past – shows that it can, it does and maybe it always will.