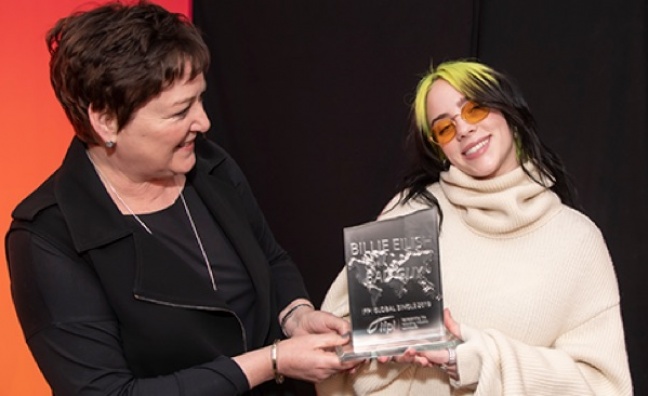 Billie Eilish's Bad Guy has been named the biggest global single of 2019.

Released concurrently with the singer’s chart-topping debut album When We All Fall Asleep, Where Do We Go?, Bad Guy peaked at No.2 in the UK singles chart. It has 1,575,892 sales to date, according to the Official Charts Company.

Bad Guy topped the charts in more than 15 territories around the world including the United States, Australia, Canada and Mexico. It was the No.2 most played song on Spotify, where it has 1,247,902,775 streams to date. It was also the most searched track on Shazam for the year.

Eilish won the International Female category at the BRITs last month, where she performed her latest chart-topper No Time To Die.

“Billie Eilish has taken the world by storm with her incredible voice and genre-defying sound," said the IFPI's chief executive Frances Moore, who presenter the singer with her award (pictured).

"She is also an artist who addresses important issues like mental health in her lyrics that clearly resonate with her fans all over the world. We wish her success for what will no doubt be another standout year.”

Read Music Week's interview with Frances Moore. Earlier this month The IFPI and German music trade body BVMI have secured an injunction against the operator of Followerschmiede.de, a prominent stream manipulation site.