BRITs 2022 showrunner Tom March: 'We're trying to create as much noise as possible' 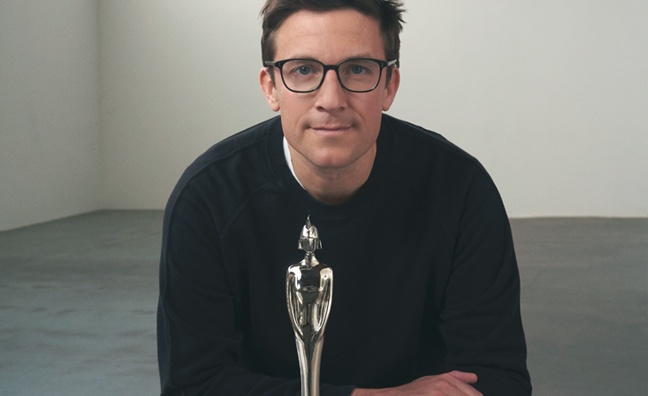 BRIT Awards 2022 showrunner Tom March has discussed how this year's revamped ceremony can usher in a new wave of BRITs fans.

The event takes place tonight (February 8) at The O2 in London and live on ITV and the ITV Hub, as well as YouTube for global audiences, when performances will include Adele, Anne-Marie/KSI/Digital Farm Animals, Dave, Ed Sheeran, Holly Humberstone, Liam Gallagher, Little Simz and Sam Fender.

Polydor co-president March (pictured), who set the scene for the BRITs in our exclusive digital cover, has overseen a raft of changes during his stint at the BRITs helm, including the decision to introduce new fan-voted genre categories: Alternative/Rock Act, Dance Act, Hip Hop/Grime/Rap Act and Pop/R&B, powered by TikTok.

"From the very first audience research I did, it was clear that fans wanted a say in who wins and it provided a great opportunity to make those awards fan-voted," March told Music Week. "I immediately spoke to TikTok about partnering, because that's where young people are discovering and connecting with music and it's one of the biggest social platforms in the world. They immediately said yes, and they've obviously gone to town on it."

Everyone is going to engage with the BRITs in different ways

Alongside the vote, the platform has launched a dedicated #BRITsTok hashtag, which has received more than 210 million views in the voting period.

"There is phenomenal global support for the #BRITsTok hashtag," said March. "Millions and millions of music fans around the world are engaging with the BRITs and voting for their artists to win. I wanted to make sure there was a way of tapping into younger audiences, to give them a chance to have a say in the BRITs and to take the BRITs to a global audience.

"If it doesn't work, and people don't like it, then it could be changed the next year. I've had amazing feedback from artists, teams and labels - everyone's been getting behind that and championing their artists' chances - so maybe it will be something that stays. But it's something I wanted to do to engage audiences globally in the BRITs and to create as much conversation as possible."

"I wanted the BRITs to feel really open," said March. "That was one of the most important things to me when I first took over. There is a huge global reach across multiple platforms and I wanted fans to own it and have a say in it. I think we've made a spectacular TV show, but Luke Ferrar has done a remarkable job working with me to bring in every single digital partner. YouTube will stream the show to millions and is supporting the BRITs on a global level. It's going to be their biggest activation ever and I'm hugely excited to see the reach that we get from the show.

handmade by jewellery designer Hannah Martin, the sculptures are 100% sustainable and made from recycled bronze and ebony pic.twitter.com/HtnJKNXybX

The BRIT Awards has also collaborated with British jewellery designer Hannah Martin, who created bespoke sculptures for all British nominees for the 2022 awards. Each British nominated artist received a bronze-cast 'B' including a unique QR code which, once activated, launched a hidden AR filter to create content with.

"It was Luke Ferrar's idea to create a BRITs 'B' award and it was great to see that go viral," noted March. "Some of the biggest artists in the world like Dua Lipa were sharing the award on their socials and that created a lovely moment and, again, created conversation around the announcements. Those awards were shared all over Instagram, Twitter and TikTok."

The content coming out of the show will be enormous

Multi-platform livestreaming includes this year’s Red Carpet coverage hosted by Munya Chawawa and Nella Rose. The 60-minute show will be broadcast on YouTube, TikTok, Facebook and Twitter from 6pm. The digital strategy has also seen the BRITs unveil its first ever NFT collection, celebrating the winners of each category.

#BRITsUnseen, YouTube’s campaign with the BRITs, has been taking fans on a journey to the BRITs through exclusive content with 2022 nominees including Griff, Ghetts, Holly Humberstone, along with collaborations with YouTube creators, a bespoke YouTube Shorts red carpet moment, and promotion across YouTube and socials.

YouTube Shorts is the official digital music partner and sponsor of the 2022 Artist Of The Year award. YouTube is also working with artists and creators to capture content en-route to the awards, on the red carpet, backstage and the day after, creating a body of Shorts and video content for socials. Fans will also be able to watch exclusive behind-the-scenes footage on the night on YouTube Shorts.

"The support we've got from YouTube, with Shorts and across the platform, is enormous," added March. "With every single [partnership] - and what we're about to launch in the gaming space - we've tried to engage social media and youth conversation the whole way through. And with the amount of creators we've got coming down, the content that will be coming out of the show will be enormous.

"We've lent in heavily with YouTube and TikTok and all partners to bring down as many of their creators as possible, so I expect loads of content to be flooding out around the awards. We're trying to lean into social media in every area to create as much noise, so the conversation can be as disruptive as possible."