'It will help us drive growth': Spotify revamps free service 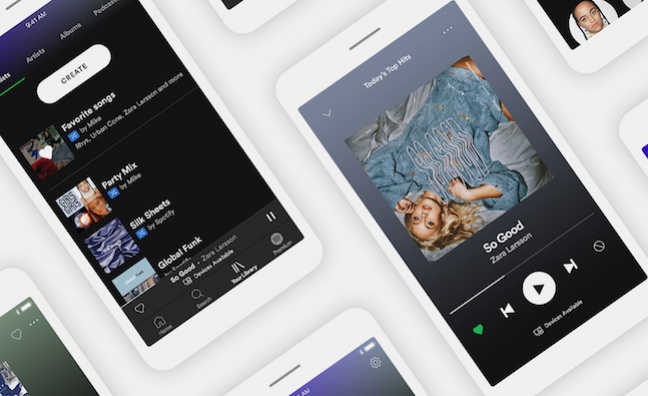 Spotify has beefed up its ad-funded free service with an enhanced mobile app that moves it closer to the subscription offering.

During its recent investors’ day ahead of the IPO, Spotify signalled its intention to maintain and build up the free service at a time when premium subscription was increasingly seen as the driver of growth in the recorded music market.

The streaming giant followed up today with a big announcement at the Gramercy Theatre in New York that was described as a “first step” towards Daniel Ek’s promise of greater transparency.

The motivation behind the revamped service appears to be capturing a young audience of music fans who can’t afford a monthly plan and then converting freemium users to the ad-free subscription service.

During today’s launch, head of creator services Troy Carter noted that 71% of monthly active users are under 34. He also revealed Shawn Mendes’ team had initially wanted his Illuminate album windowed on premium Spotify but were persuaded to go on the free service because of the reach it has with young music fans.

“There are millions of music fans who simply can’t afford to pay $9.99 a month,” said Carter. “Artists now see the value of both services.”

Spotify has 90 million ad-supported users, compared with 71m subscribers. The ad-funded free service was launched on mobile in 2014.

Key features of the revamped service are:

Söderström was bullish about the move and compared the free tier to radio in its ability to create revenue from exposure to music.

“We know it’s the only way of being able to achieve our goal of getting billions of fans on the platform and getting the music industry to the size it should be,” he said. “We are doing this because it will help us drive growth – growth for the industry and growth for the creators.”

Söderström went so far as to describe Spotify as the “R&D department of the entire music industry”.

“The opportunity for the industry is clear,” he said. “Music is easily as big as social networking – potentially even bigger.”

He suggested that if their growth strategy for freemium pays off then “the glorious ‘90s will look like a practice run for the industry”.

Spotify is expanding into other services including partnering with car manufacturers, as well as bundling with a TV subscription. It is also being tipped to launch voice control products.