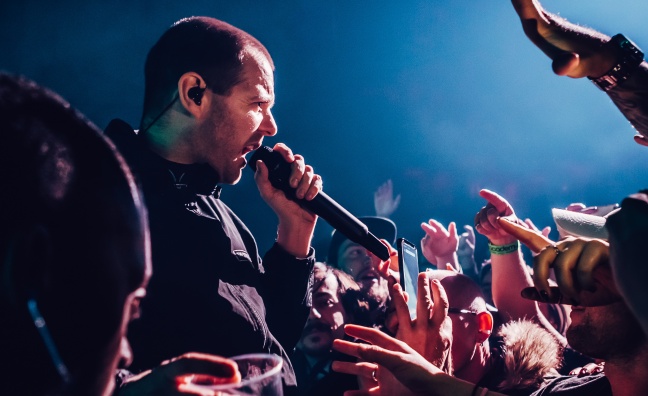 Tonight (August 6) The Streets will return to the stage for an exclusive live performance at EartH Hackney.

The livestream is in celebration of the release of their 2020 mixtape None Of Us Are Getting Out Of This Life Alive.

The gig will be the first club appearance Mike Skinner and his band have made since 2006, offering a one-off setting for fans to watch the band play in such an intimate venue.

Fans will need to purchase tickets to watch the event, and will be offered an optional charity donation to Show Racism the Red Card chosen by Mike.

Tickets are available now and will be broadcast live at 9pm BST.

Broadcast live on ITV2, V Festival is set to return digitally thanks to Virgin Media, after a three-year hiatus.

Anne-Marie, Olly Murs and Dizzee Rascal are set to headline the weekend, with rising artists and archive performances also lined up.

It will be filmed at the festivals old location site, Hylands Park, and broadcasted in one-hour long specials hosted by Maya Jama and Joel Dommett.

Tune into ITV2 on August 21-23 to catch all the action live.

In partnership with Global Citizen, Clean Bandit will be hosting and performing for House Party Against Hunger, a 12-hour virtual festival aimed to help raise funds to fight against hunger.

The stream will air on the band’s YouTube channel on August 8, kicking off at 12pm and running until midnight (BST).

“We couldn't be more excited to partner with Global Citizen on House Party Against Hunger. It's never been more important to take action; to empower the world's most vulnerable people, especially those from rural and remote communities,” said Clean Bandit.

“Before the COVID-19 pandemic, 1 in 9 people were hungry or undernourished globally, with 132 million people approaching starvation. But the economic impacts of the virus means that could double to 265 million before the end of the year.”

"The world desperately needs more empathy. That's why we're backing Global Citizen's campaign calling on world leaders to do more in the fight against hunger — and urging our fans looking forward to our all-day house party on August 8 to head to their social action platform and support the campaign too. It's not about donating money. It's about raising your voice."

It has been revealed that Biffy Clyro will be play a worldwide livestream performance to celebrate the release of their new album A Celebration of Endings.

The stream will air on August 15 from an undisclosed “iconic” Glasgow venue, and will see the three-piece perform the entire new album from start-to-finish live for the first time.

Without an audience, the band aim to use the space to their advantage by performing in various set-ups to “create a unique and truly special experience.”

“We are really excited to launch A Celebration of Endings with such a unique and ambitious live performance from one of our favourite venues,” said lead-singer, Simon Neil.

“We would love to be playing live shows to our fans across the world, but as this is not possible we are going to bring the biggest Biffy album launch imaginable direct to your living room.”

Fans will also be able to catch the band perform older hits as they soundcheck, which will be streamed before the main show.

The show will be streamed via YouTube at 9pm BST, and will be a ticketed event.

Presented by Goose Island, Supergrass will be performing in 360º in a one-off virtual reality event on August 21.

Fans will be able to watch the band perform at Manchester’s Band On The Wall, as they play a set that would have been performed on the festival circuit this summer.

The event is ticketed, however all proceeds will be shared and donated equally between Nordoff Robbins Music Therapy Charity and suicide prevention charity CALM, which has been chosen by the band.

Goose Island has previously worked with Blossoms, Run The Jewels, Shame, Mumford and Sons, The Vaccines, Tom Grennan and Everything Everything.

Supergrass said: “After having to postpone many of our live shows this year, we're so happy to team up with Goose Island to play a really intimate show in Manchester to raise money for two charities close to our hearts Nordoff Robbins & CALM. We love playing live and can't wait to share this intimate show with people virtually too.

“Grassroots venues in Manchester and everywhere else are battling to survive right now and they’re desperate to be able to access the money the government has promised to help them. It’s really important that the process is fast tracked now so that no more venues have to close for good and they can fully open up for bands and fans as soon as it’s safe.”

To mark the 75th birthday of Van Morrison starting on August 31, 75 Irish artists will pay tribute to the musician covering songs of his they love on YouTube for Rave On, Van Morrison.

Created by Ireland’s Hot Press magazine, the event will continue throughout August until September with a full schedule yet to be announced.

Country star Tim McGraw will perform live from Nashville on August 21 to celebrate the release of first solo album in five years, Here on Earth.

The interactive experience will allow fans to catch the exclusive performance for one-night-only as he shares stories behind the new songs, as well as playing fan favourites.

The livestream will be powered by interactive streaming platform Maestro. Also used by Melissa Etheridge, Trivium and Bush, the growing platform enables artists to control their show, from the revenue to the audience data.

The ticketed event is an exclusive one-night-only performance presented by Live Now, and will be recorded and livestreamed from London’s V&A museum.

Taking place on August 26, the event will see Goulding perform a set from her new album for the first time, as well as some of her biggest hits accompanied by live musicians.

Speaking on the event, Goulding said: “Since touring isn’t possible for the time being I’m so excited to be able to debut some of my new album to fans across the world with this one-off show.

“It’s a truly incredible opportunity to push my creative boundaries and perform inside one of London’s most iconic museums - I can’t wait for you all to see the spectacle we have put together for this extraordinarily special experience.”
A special guest will also be announced within the coming weeks and tickets are able now.

The series will cover artists from across country, Latin, R&B, pop, and rock bringing music directly to fans’ homes.

Interactive options will also be available, as some fans will have access to virtual meet and greets, as well as Q&As with the artists, exclusive merchandise, live chats and more.

“I love unexpected collaborations and finding new ways to bring my fans music, especially while we aren’t able to tour on the road,” said Brown.

“You all mean so much to me and I’m happy to team up with Pandora to create an amazing virtual performance with some surprises for you.”

James Bay's stream in support of Save Our Venues

In partnership with Save Our Venues, James Bay livestreamed worldwide last Thursday to help raise funds for struggling music venues across the UK.

Bay said: “Big or small, spending time honing your craft and performing in venues is vital on the journey to becoming a successful touring and recording artist. We must never live in a world where live music venues don’t exist.

“They are as important for the artist as they are for the countless visitors and of course the dedicated staff that devote themselves to running those rooms like clockwork. Venues offer a joy, an escape and a magic you just don’t experience through a screen or even through a stereo speaker. At all costs, we must save our venues.”

Relive the full set below…

Idles to play a trio of livestreams

The album will be the band’s third, following the release of Joy As An Act of Resistance and is set to drop September 25.

The livestream will take place in a “iconic” studio from August 29-30 for an exclusive ticketed event.

Frank Turner has hosted a series of livestreams pegged #IndependentVenueLove over the course of lockdown, as he encouraged fans to donate to a venue each week to help support music venues at this uncertain time.

Now, Turner has turned it up a notch. Frank Turner will be joining forces with The Sleeping Souls once more on August 9 to mark his 2,500 show. It will be the first of his livestreams to be filmed in high quality featuring an hour long set from the band as they play their greatest hits. Tickets are available now through the Dice app.

The party will be running from now until August 15 with a selection of different albums every day.

The live performances are available on the band’s YouTube channel at 10pm BST each week and fans have already seen an hour long set from A Tent In Dublin (2000) and two hour long sets from Berlin (2016) and Buenos Aires (2009) among others.