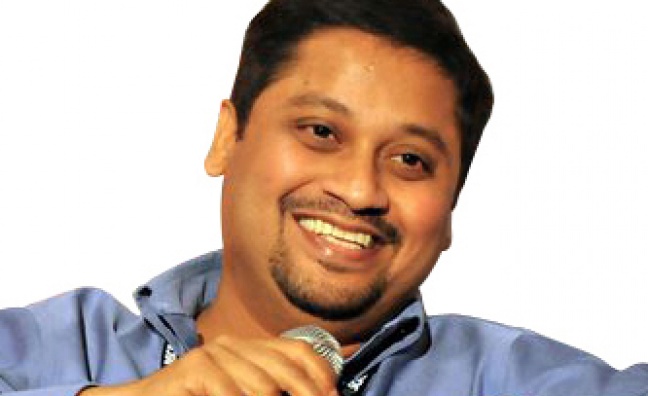 The IFPI will unveil its Global Music Report later today, giving the biz a picture of the music industry around the world.

But, whatever the survey shows for 2018, there’s no doubt which market is attracting the most interest right now: India. With a burgeoning streaming sector, the territory has seen recent launches from YouTube Music and Spotify (the latter walking into a licensing row with Warner Music Group in the process) as tech companies and music companies alike try to tap into the sub-continent’s huge 1.3 billion population.

But India is a highly idiosyncratic market, and likely to prove a tough nut to crack for Western companies and artists. So Music Week went straight to one of the country’s most influential music executives for some insight.

Mandar Thakur is COO of Times Music, one of India’s leading labels and music publishers. Times Music’s parent company also has an interest in leading streaming service Gaana, so Thakur – who recently starred at the MUSEXPO conference in California – is right in the middle of music’s latest battleground. As Warner/Chappell’s sub-publisher in the region, he declined to comment on the Spotify row. But he happily held forth on streaming, Bollywood and why India might be the next global talent hotspot…

Are you finding there’s a lot more interest in the Indian music market at the moment?

“Most certainly, the last month has been intense because of the Spotify-Warner stuff that went on. We’ve had lots of services and DSPs launching. Traditionally, when Indians were asked, ‘What do you want to be?’, you’d say a doctor or a lawyer or an engineer. Today, ask anyone and they’ll say they either want to own a collection society or launch a DSP!”

Will Spotify and YouTube Music be able to compete against the local services?

“India has always been a complex market. The local players have been here for years, they’ve had the ability to build up a loyal following at a level that’s really large. They all have natural advantages as well. JioSaavn is owned by telecom operator Jio, who are the single largest reason for the entire digital ecosystem here. Gaana is co-owned by Ten Cent. Wynk is attached to the No.2 telco so they have an advantage as well. The local players are so strong, while international players have a certain set of limitations. The Apple brand is great, but it’s only scratching the service, this is an Android country. The Spotify brand is very strong in the major metros, a lot of millennial kids have been exposed to Spotify, but in the hinterland, it’s the local brands that are really dominating. Spotify will certainly create an impact because of the brand. But will it make an earth-shattering impact? I’m not so sure.”

It’s the local brands that are really dominating

How has streaming changed the market?

“Streaming is transforming India. But I certainly don’t expect India to be a profitable business for the DSPs for a while, it’s a low ARPU [Average Revenue Per User] market. But will hundreds of millions of consumers latch onto streaming? They already are. For subscriptions, contrary to popular belief, I believe India is not about everything being free, it’s really about offering value. The ideal price point is a big debate, but if you look at Netflix or Amazon, people are paying for them, so there’s no logical reason why people wouldn’t pay for music, it’s just a matter of slowly converting them. Look at the GDP and a median level of salary. I don’t see those people paying money for a service, they’d rather pirate it. I don’t seeing everyone paying for the privilege of listening to music; they’ll feed their stomach first. But it’s a mega volume game and that’s what the services are looking for. If they reach a particular threshold, it begins for them.”

How big can India get in global music market terms?

“We were No.19 on the IFPI chart [in 2017] but we could be a Top 10 market. It’s more than possible, it’s a question of subscription conversion happening in time. But streaming is not the only story. It’s a more glamorous story, but the larger part is actually Indian publishing. The income coming out of brands, sync and societies is really where the action’s at. Do a simple map of the amount of restaurants, bars, clubs, concerts that are held in a country of 1.3 billion people. Imagine the long tail on that. India’s seeing is a massive retail revolution, which means brands follow and new brands are being built everyday. Talking to a digital savvy young Indian audience means using music to connect. Income from brands is shooting up big time so, while streaming numbers are large, in terms of actual value coming in, brands and syncs and music licensing are where it’s coming from.”

Will we see Indian music break out onto global streaming charts in the way Latin music has?

“It’s already happening. Of the Top 5 YouTube artists, three of them are Indian and only one is topical, the other two haven’t recorded a song for years. Middle India is not very savvy, they listen to songs from bygone eras but sheer numbers have shot them into the Top 5. That’s staggering. You also have a 100-year musical heritage and history that revolves around melody and rhythm, plus the ability to communicate in English, so it’s a very powerful combination for songwriters. I think you’ll see more writers emerge [than artists]. That route will happen first because the songwriting talent is advanced.”

How about the potential for western artists to succeed in India?

“The share of international music on leading streaming services is growing. Bollywood still contributes 90% of streams but is not growing as fast. Bollywood is using a lot of international hip-hop and rap in its songs so the sound more than the artists is spreading for now. If there’s enough time invested in the country to tour or get a couple of sync deals, you can get something going. But you have to come to terms with the fact that it isn’t going to be a billion dollar market in the next few years just because there’s a billion people.”