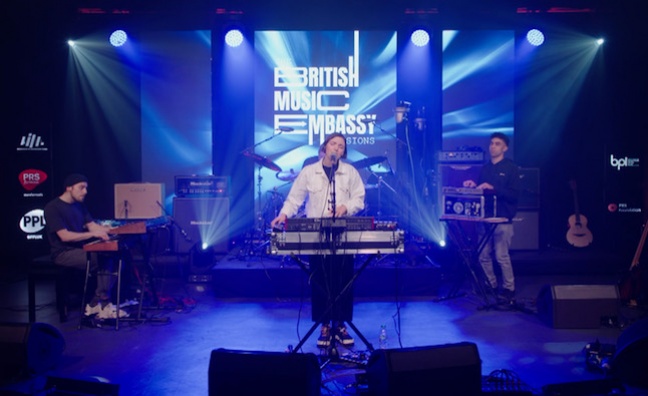 MQA is building on its pioneering role in bring master quality audio to fans with new livestream and video partnerships.

The British audio technology company recently teamed with the Bluesound brand, Jazz Re:freshed and British Underground on a livestream series, The Master Sessions. The performances from acts including Seed Ensemble were streamed through Bluesound’s hi-res audio players within deal networks across the UK, Europe and North America.

Now, MQA has moved into video livestreams, which have become the only performance outlet for artists during the Covid-19 lockdown. MQA is an award-winning technology that 'folds' the full sound of the live studio performance into a stream that fits alongside HD video.

When SXSW was cancelled due to the coronavirus, MQA stepped in to livestream The British Music Embassy (BME) Sessions last month. In partnership with Jazz Re:freshed, the HD video and MQA audio sets are being made available on demand here beginning with Leeds-based quartet Noya Rao (pictured).

The BME Sessions will also be available as audio-only tracks on Tidal for users with a Tidal HiFi subscription.

How has MQA been helping artists reach audiences on platforms with HD audio and video during the Covid-19 lockdown?

Mike Jbara: “The last couple of weeks have certainly had livestreaming at the centre. We've been able to work through a lot of the production, technical and engineering aspects that some of our partners are now running into. A lot of them are picking up the phone and saying, ‘You know that topic that you've been been speaking with us about, we're interested in putting our toe in the water.’ And so livestreaming and live production have been a big part of it. It's been an active time even in our recorded music space. We've seen renewed energy from our label partners in wanting to make sure that their high-quality audio is up to date with streaming services. We've been asked to engage in terms of interacting with the labels to make sure that all of the partners are receiving the content completely. So it's been busier than we were prior to this terrible virus. Livestreaming is a big part of it. And we've been able to navigate the remote working relatively easily.”

How is MQA ramping up its video partnerships during the lockdown?

MJ: “Bob and I started to meet with companies before the lockdown happened, showing them MQA audio inside a high-definition video. It wasn't necessarily a live streaming focus. We had just began to engage partners and video-centric companies about improving audio inside of their video experience. Audio, video, livestreaming and getting releases up on services on a timely basis have been the focus during the last few weeks.”

How significant was the SXSW livestream of The British Music Embassy (BME) Sessions for MQA?

MJ: “A remote SXSW presented a very natural opportunity for us. We were going to be supporting some performances at SXSW this year, and showing off the livestreaming and MQA Live technology, so those conversations continued when SXSW was cancelled. There were artists on that bill that we're going to be MQA Live partners from Austin. Now we're going to be rolling out a number of the assets from that six-hour show in coordination with the artists, their management their labels and event promoters.”

Why do you think it’s important to bring audio quality to music video performances?

Bob Stuart: “Sound quality makes a huge difference to whether you can really enjoy the music or engage with the artist. We’ve been working with TV broadcasters, there are some experiments going on in Japan putting MQA onto video. There's a big difference between CD quality and high resolution audio, but in the video space it's even bigger, because typical YouTube video has got really poor, lossy audio."

HD audio has entered the mainstream with services such as Amazon Music HD. How did MQA lead the way?

MJ: “We've been helpful in eliminating the choice between quality and convenience. We've shown that if you need to communicate a better experience, meaning it's important to your brand or you think your consumer will care, the technology is available. The early work we've done with the labels included getting them to understand MQA, so that they saw it as an enabler for the commercial premium that they're all regularly trying to pursue. And it also makes them better advocates for the artists that are signed to them. If you look at the history of MQA, that's really where Bob was coming from when the kernel of this idea was created many moons ago. How do you get the original expression of the music from the artist to the fan in the most direct way? Everything that we've done on the technology is formed by the idea that you want the fans to hear it as if they’re in the room with the artists.”

BS: “Our goal is to is to actually deliver you the sound that you could have heard in the studio.”

Would you like to see Spotify and Apple Music embrace master quality audio for streaming?

MJ: “We want to make it available to every consumer, so the answer to that is absolutely yes. The MQA relationship with the music service is only one part of a two-part relationship that needs to exist, between MQA and the service and then the service and the copyright holders. Each of those companies and the labels have their own set of relationships and strategic objectives. We’re very pleased about the state of our relationship with all of those services. It's really a matter of them being able to establish direct relationships on the content side, based on what they're trying to achieve.”

Where is hi-res and master quality streaming going next?

MJ: “It's obviously too soon for any of us to predict what new behaviors will exist when we all leave our homes and re-enter the world. But it does appear that the focus of some of the video companies on audio quality during this period, be it livestreaming or just what they were interested in even before the virus epidemic, will drive the audio services to need to raise their game. So the improvement across the board of music streaming services may be driven by competition in other adjacent categories like video and gaming. It could be quite positive for MQA but it may not be driven by the streaming services alone.”

BS: “One thing that’s different about MQA is that we’re talking about delivering quality everywhere. The way that our coding works, it's really very clever because the whole content will come to you and then your device will unwrap it as far as it can achieve sound quality. So we're not really thinking about our expansion in terms of this kind of smart speaker or TV bar, because everything sounds better – earbuds, headphones, bluetooth, wireless connectivity, surround sound. These are all areas in which we are rapidly expanding our reach.”