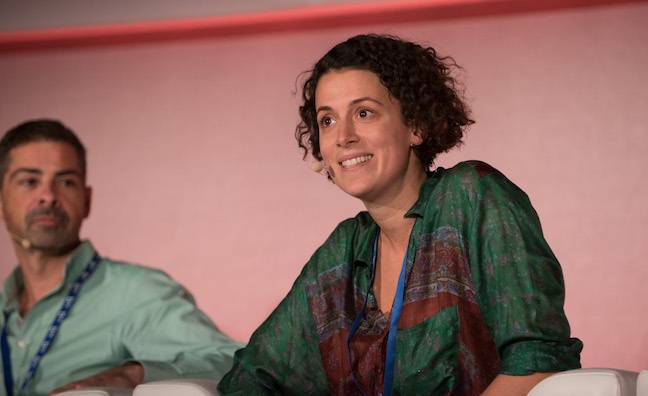 There were a host of big issues up for discussion at the the Music Week Tech Summit Together With O2. Here’s our round-up from some of the panels at the inaugural event at The O2….

Start-ups need to know their stuff (rights for a start) if they want to try and work with the music business - but there are big opportunities. As the label exec behind the BPI Innovation Hub, Vanessa Higgins was the obvious choice to bring together panellists from different sectors to discuss forging new partnerships. Claire Mas (pictured), head of digital at Island, said she would “always try to take a meeting with a tech start-up” but warned against lazy thinking. “Everyone wants to do a Facebook for music - we don’t need a Facebook for music,” she said.

Isabel Garvey, MD of Abbey Road Studios, said that its incubator division is very focused on tech. “We are very excited about artificial intelligence,” she said. “Artists are really engaging with this as a tool.” But she also stressed that the music industry was not about to be overrun by Terminator-style pop stars: “The robots are not coming just yet.”

New kid on the blockchain

Is blockchain the future of the music industry? Based on the fascinating closing panel, a better question might be: what is blockchain? While there's a lot of label excitement about its potential, its application has a range of possibilities from rights management to cryptocurrency for artists and platforms. The latter option apparently doesn't sit well with digital innovator Bjork. "I got told off by Bjork for coming on this panel," said Andrew Melchior, founder, 3rd Space Agency, a VR collaborator of the Icelandic singer.

While Blockpool CEO Kevin Bacon was wary of "hype", Jaak commercial lead Becky Brook could see the possibilities of blockchain for the biz. "The most exciting application is a solution that helps to solve the industry's data problems," she said. "It's not a panacea - you can't just make a Spotify blockchain."

O2 head of sponsorship, Gareth Griffiths, made the benefits of the telecommunication giants love-in with live music perfectly clear during his morning keynote. Griffiths said the company’s research indicated that 63% of the customers attending O2 Academy venues were more likely to remain with O2. “Brand awareness and brand considerations are key metrics for us and we know over a long period of time that the music and our venues really help with that,” he said. Griffiths went on to describe the Tech Summit’s host venue, The O2, as “probably the biggest brand asset we have”. “It is the world's most successful venue when it comes to ticket sales,” he said, adding that fostering customer loyalty was at the heart of everything it does. “Our loyalty programme, Priority, it's the biggest digital loyalty programme in the UK. We're now up to over 5,000 shows a year, 2,100 artists and we cover over 400 venues - not just the 21 venues where we have our name above the door. And we've shifted over six million tickets via Priority Tickets.”

How to reach more fans was a key concern during the Data & Music panel, with Ticketmaster MD Andrew Parsons pointing out that the ticket buyer was not necessarily the most die-hard fan. “The ticketing business has been very reliant upon the person who makes the purchase,” he said. “The person who's the most organised, has the most money in their bank at the time, isn't necessarily the biggest fan and that's something that we've struggled to overcome as an industry over a period of time. That's a thing that we've been working hard to be able to overcome with this move to an idea of more digital ticketing.”

AEG Europe’s SVP of IT, David Jones, discussed the progress being made in that regard. “A venue like The O2 will have say 50-60% of the manifest and the promoter will have the other portion,” he noted. “The reality is we might know 25% of the people coming into the venue so, for us, a lot of focus is going on identifying who those additional consumers are.” Introducing high-quality Wi-Fi to the venue has been beneficial in more ways than one, he added. “We find that, particularly for an event with a young demographic, more than half the audience connect to the Wi-Fi and we're essentially adding another 5-10% of the audience to our database that we can market to in the future. That's been really valuable for us.”

AEG’s new venue apps could also provide a crucial D2F avenue in the longer term, said Jones. “In the last 18 months or so we've been rolling out new mobile apps for all of our venues which will support in-venue commerce opportunities - the ability to buy food and drink and merchandise and to do upgrades and so on,” he said. In some ways even more importantly for us, that will allow us to deliver tickets to the individual consumers and therefore allow us to build an individual relationship with those consumers in the long run and hopefully therefore move beyond just using email as our primary digital marketing tool and being able to use push messaging.”