My TikTok life: Nina Nesbitt on the joys of going viral 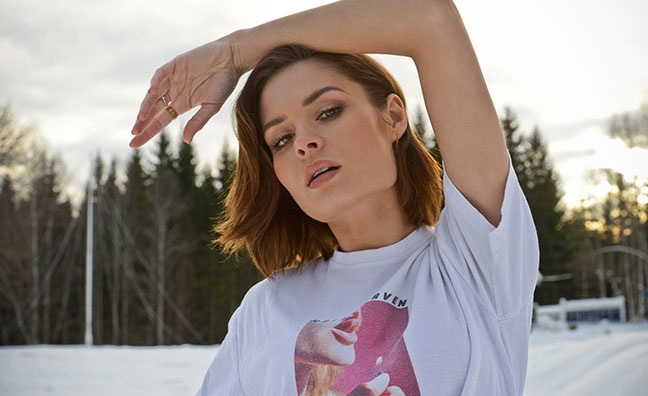 If there’s one thing that has transformed the way the UK music biz works this year, it’s TikTok.

The video-sharing social media app has powered countless hits in 2020, from Doja Cat and Jawsh 685 to Saint Jhn and Saweetie. But it’s also provided a new platform for many more established artists.

One of those is singer-songwriter Nina Nesbitt. She only joined TikTok in the early days of lockdown, after being encouraged to sign up by manager Vicky Dowdall of VDM Music, but has carved out a following of over 348,000 since then. Her videos – usually ‘found sound’ recording sessions or spontaneous ditties dissing ‘fuck boys’ – can attract over five million views, more than even her biggest songs have on YouTube. The TikTok clip of Hollywood A-lister Reese Witherspoon dancing to Long Run, Nesbitt’s current collaboration with Witherspoon’s son Deacon, has over 36m views, while the track also has over 4.6m streams on Spotify.

With the follow-up to Nesbitt’s most recent album, 2019’s The Sun Will Come Up, The Seasons Will Change (Cooking Vinyl, 23,717 copies sold, according to the Official Charts Company) on hold due to the coronavirus pandemic, the star took time out to talk Music Week through her TikTok adventure…

Why have you been so successful on TikTok?
“Honestly, I’ve got no idea what I’m doing on it! I think I’ve just been quite lucky. My label and my manager were like, ‘You need to get on TikTok’ for about two years, but these things can come and go so I was a bit hesitant and I thought I was a bit old! Then during lockdown I was so bored I was like, ‘You know what, I’m going to give it a go’. I did like a production video, writing a song in my flat, didn’t really think anything of it and then it went viral as they say. And I’ve just discovered this whole new fanbase, because it’s very different to Instagram or Twitter or even Spotify, it’s another whole new market. There are loads of people who’d never even heard my music before, which is pretty cool. I’m a big fan, I must say.”

my ‘loyal to me’ recreation breakdown ? ##fyp ##learnontiktok ##quarantine

What do you like about it?
“On Instagram and Facebook, what frustrates a lot of artists is that you spend that time building a fanbase and then you post and it doesn’t even get out to all of your followers, which is pretty insane. But with TikTok, it’s a constant [stream of] new people, so it’s a really good way for building a new fanbase. I’m getting a lot of new followers on Instagram from TikTok as well – I must have gained 20,000 followers in the past few months, just from people finding me on TikTok. On streaming people can connect to the songs but a lot of the time they don’t know who you are. TikTok is a good way to put a face to the name. I did a few videos for [2018 single] Loyal To Me and a lot of people said, ‘Oh, I didn’t know you sang this song’, so it’s a good way for getting yourself out there to a new audience.”

A lot of labels are freaking out, because you can’t be in control of TikTok

Does TikTok also boost your streams on other platforms?
“I’m a bit of an insights nerd, so I get my Spotify For Artists literally once a day and I could see a huge spike when Loyal To Me went viral. That had 5m views and it was bringing people to stream my song, which is good. I haven’t had one of my songs go viral as a sound, but I’ve noticed a huge difference building the other platforms. Some people are literally getting 200m streams through going viral on TikTok but you need the sound to go viral, not the videos.”

So will you be looking to soundtrack a TikTok trend next?
“Definitely for my new music. I’ve got contact with the people now, so I’ve asked questions about how it works but I’m not really approaching anyone about anything like that until I’ve got a new single. But I’ll definitely look into it. Any artist that has lyrical songs has a good opportunity on TikTok. When I started it was all about going on the iTunes chart and now it’s getting a viral video on TikTok – it’s quite bizarre! A lot of labels are freaking out, because you can’t be in control of this. It’s caught everyone by surprise, but it’s good, because it gives unsigned artists more of an opportunity. It’s giving space for more alternative music as well, which is cool. You could literally put a bedroom video up and it suddenly blows up, which is exciting.”

How did you feel about Reese Witherspoon inventing a TikTok dance to one of your tracks?
“It was probably one of the most surreal things I’ve ever seen! I mean, would that happen elsewhere? No. It was totally bizarre and great at the same time.”

So will you keep TikToking?
“I think so. I’m not putting any pressure on myself to do it every day, it’s just whenever I think I’ve got a video that suits the platform. I’ll definitely continue to use it for the next album, because it’s very lyrical and about storytelling, which works well on TikTok. We had a hard time on the last album because the streams were so big, but a lot of people didn’t know they were my songs. It’s hard to then transfer all of the streams into ticket sales or a following on Instagram, but TikTok is a good bridge for that.”