Siri-us business: Everything you need to know about Apple's new HomePod 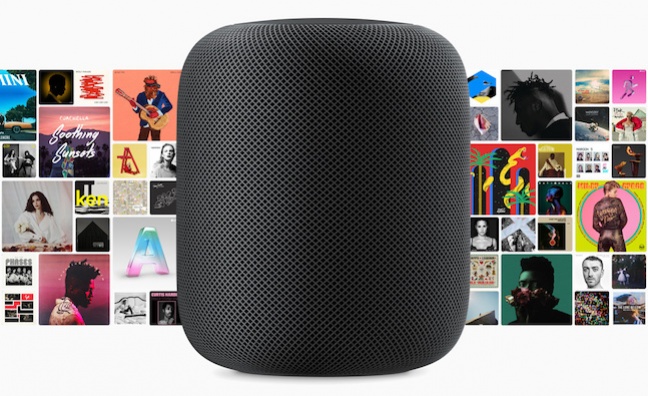 But delays in its production have left Apple trying to play catch-up in the sector, which is currently dominated by Amazon’s smash hit Echo product, and also features Google’s Home device.

So can Siri take on Alexa? Music Week tried out the new device and is here to tell you the key takeaways…

1. IT’S ALL ABOUT THE MUSIC

Amazon pitches the Echo as a smart home assistant that happens to play music. Apple is positioning the HomePod firmly as a music device that can also help you out around the house. The marketing and demos both focus heavily on music and it has an emphasis on audio quality that will please the audiophiles out there (if Apple didn’t kill them all off by popularising digital music in the first place). The question is: will hardcore music fans embrace voice control the way more casual fans have? Apple is betting big that they will.

2. IT’S A SERIOUS PIECE OF KIT

The HomePod contains some major spec within its still-svelte and pleasantly futuristic frame. There’s a lot of stuff about “high-excursion woofers” and “custom seven-tweeter arrays” that we’ll spare you, but the real kicker is that it’s intelligent enough to adapt the sound according to where you place it in the room and what music you’re playing. And it sounds great, certainly better than most of, and maybe all of, the competition, and it goes louder and stays crisper too. But then, with a price tag of £319 (versus £75 for the Echo and less for the Echo Dot), it should. Another question: are there enough people out there willing to pay that much more for better sound?

3. APPLE WANTS TO LOCK YOU IN TO ITS SYSTEM

One thing definitely in HomePod’s favour: it’s an absolute breeze to set up. But only if you have an Apple device. It doesn’t work with Android phones yet. It will let you play Spotify apparently, but via more complicated means than the built-in Apple Music, so Apple is presumably hoping people won’t bother. Apple Music is getting better all the time so that’s not exactly a hardship, especially if you’re new to all this. But while Apple’s lockout worked in the age of the iPod, and there’s still no hardcore tech devotee like an Apple devotee, whether it can still make that work in 2018 remains to be seen. But having its own voice-controlled device may help it steal a march in its increasingly close battle with Spotify which, while widely used on Amazon’s system, could – at least in theory – be locked out of voice at any time.

Of course, Apple actually pioneered voice with its Siri assistant on its phones. Siri is present and usually correct on HomePod, it can tell you info about what you’re listening to and do all the household tasks you’d want (Turn the heating on! Boil the kettle! Dim the lights!), should you actually live in a house where you can do stuff like that. So how come Siri doesn’t feel like a cultural phenomenon like Alexa? And that’s the thing about HomePod: it’s a great high-end music product but, at this admittedly early stage, it seems to ask almost as many questions about Apple’s strategy as it answers. Hey Siri, what’s up with that?