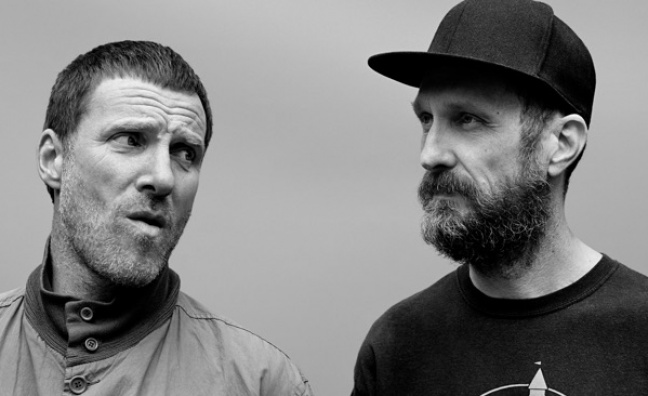 Sleaford Mods are launching their own "SMtv" to accompany the release of their new album.

Having staged a live streamed gig at London's 100 Club in September, the duo, who are putting out their sixth LP Spare Ribs on Friday (January 15), are returning with a new online stream format.

Taking place on Saturday (16), and streaming via the group's YouTube channel from 8pm, the Spare Ribs Special TV show – which affectionately nods to the title of ITV's 1990s/2000s Saturday morning chart show SM:TV – will include live performances, interviews with the band and appearances from special guests, who include Robbie Williams and Iggy Pop.

"We already make some really great stuff for the group's socials – a spoof chat show and even a baking programme – and considering how a band like Sleaford Mods truly chimes in with the times we are all experiencing, it quickly became clear that we could safely create an hour-long TV show of our that will both showcase the new album and give people watching a laugh," the band's manager, Claire Ormiston of ATC Management, told Music Week.

"Having done a live streamed gig already, I know how important it is to constantly innovate and engage with the audience online – there is a lot of competition for attention – so the band were keen to explore something new and I can safely say our SMtv will be uniquely Mods."

The TV special is part of a series of activity around the release of Spare Ribs via Rough Trade Records.

The group have just released a video for single Nudge It, and have also announced a UK tour for the autumn boasting their biggest ever dates, including a hometown show at Nottingham's Motorpoint Arena on November 27.