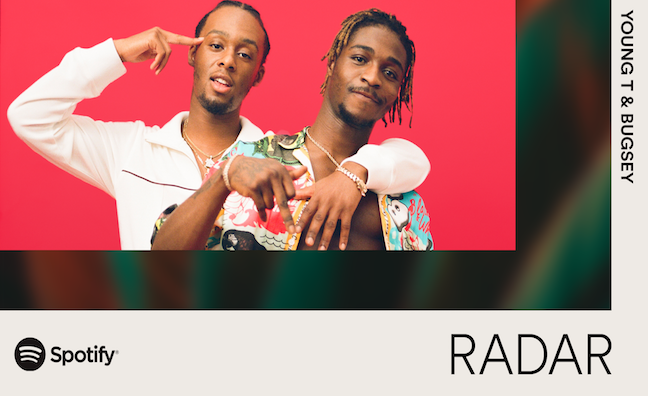 Spotify has announced a list of new acts who will be the focus of their new emerging artists programs Radar.

Spanning 50 markets across the globe via a series of 17 sister programmes, Spotify UK & Ireland have nominated duo Young T & Bugsey as their pick for the new campaign.

"The support Spotify have shown Young T & Bugsey so far has been amazing, and it's really exciting to see the team offer long-term support through their Radar campaign," said Kilo Jalloh, founder of 2K Management who look after the pair.

Duncan Scott, managing director of Young T & Bugsey's label Black Butter Records, added: "We're thrilled that Young T and Bugsey are part of the first Spotify Radar campaign. It’s great to see their talent getting an even higher level of support at this key moment in their career.”

Look out for an interview with Spotify UK & IE head of music Sulinna Ong for more on the Radar project very soon.

The full list if international Radar artists is as follows:

France – Lous And The Yakuza, Yuzmv, Phillippine and Hervé

Austria – Avec and My Ugly Clementine

Read our interview with the team behind Young T & Bugsey. Plus, Music Week subscribers can read our exclusive interviews with the team at Spotify's UK HQ. To subscribe to Music Week and never miss a vital music biz story, click here.