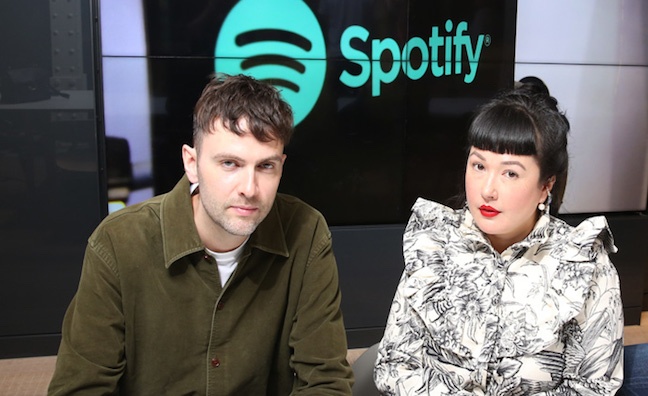 As Spotify’s first head of music for the UK and Ireland, a big part of Sulinna Ong’s job is helping to break artists.

It was a role created specially for the former Deezer exec, who features on the cover of Music Week with Spotify UK MD Tom Connaughton (pictured with Ong) – click here for our bonus online interview with Connaughton.

In the Music Week magazine interview, Ong outlines the career trajectory of Sam Fender on Spotify, who supported the singer-songwriter back in 2017 and then hosted an event with the Polydor artist in his home town of North Shields on the day he hit No.1.

Urban has a dedicated team at Spotify, which has had huge success in the past year with UK rappers Dave, AJ Tracey and duo D-Block Europe.

“Hip-hop and urban music is in a perfect place with streaming, they have always been early adaptors of technology,” said Ong. “For urban artists, it’s second nature to use streaming to gather an audience and fanbase.”

In a bonus online interview, Ong opens up further about what Spotify UK can do for artists.

“It takes time to do this and we’ve worked with these artists for a long time,” said Ong. “Dermot Kennedy's a great example. In 2015, Dermot was busking on Grafton Street [Dublin] and released a song called An Evening I Will Not Forget on Spotify. That song ended up in Discover Weekly for some of our users. That's an ‘algatorial’ playlist [a combination of algorithms and human editorial].

“Dermot’s been very vocal about how that's played a really key part in basically having a live business. He was able to tour and, through Discover Weekly, he was worked through the pop pyramid – the feeder and genre playlists into Hot Hits UK and Today's Top Hits, which is our biggest global playlist. Fast forward to now, he’s sold out arena shows in Dublin, he's been on the cover of New Music Friday and has almost eight million monthly listeners.”

Ong identified a key a role for Spotify in educating artists on using streaming.

“With the artist and industry partnerships team, that is very much their role, they are really making sure that they have great relationships with the industry bodies, hearing their feedback, and vice versa,” she told Music Week. “But there’s also that educational process of speaking to artists, because we do believe that we need to provide artists with every opportunity to have their music heard. So that means educating them on the tools that are part of the Spotify world.

“Our goal is to support an artist through that entire work chain, whether that’s Soundtrap, so you're able to record and write using this digital recording software; using SoundBetter, which is a database where you can find the best professionals, whether you need a bass player, an engineer or producer; working with our artists and industry partnerships team, you might go to an artist masterclass. You might be using Spotify For Artists and pitching for a playlist and understanding where your streams are coming from, maybe to plan your next tour, and working with our editorial and artist marketing teams when it gets to that point in terms of a bigger campaign. So, throughout that whole chain, that's our goal.”

But can Spotify co-exist with physical music, which is also important for artists’ revenues?

“We've seen the resurgence and the renaissance of vinyl, which happened in tandem with the rise of streaming, and that's really interesting,” said Ong. “When you look at the marketing campaigns that the artists’ teams run, they use vinyl like a souvenir. You often see fans buy the vinyl as well as stream the music. So that's an interesting dynamic that we see and a trend that that seems to be increasing. It’s welcome, especially vinyl, which has a nostalgia and a romance about it.”

Streaming platforms have also shown their support for initiatives including National Album Day, following criticism that they were too track-focused. Ong said Spotify will support artists’ album campaigns, when they progress to that point in their career.

“Albums are still a major way, on Spotify, that we see listeners engage,” she told Music Week. “And actually our most engaged users seek out the album, especially for discovery. We support that in new releases, and our social and marketing campaigns and a lot of our artists’ campaigns. For example, Sam Fender and Dermot Kennedy, they were really built around albums. So it's an important part to how listeners choose to listen to music.”

To read the Spotify interview with MD Tom Connaughton, Sulinna Ong and podcast supremo James Cator, pick up the latest issue – or subscribers can click here.