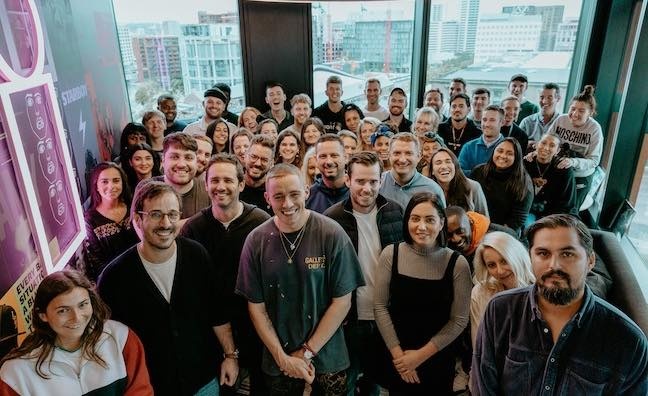 Island Records is celebrating a No.1 debut album for Dermot Kennedy. Without Fear opened at the summit with sales of 20,061, according to the Official Charts Company.

“The No 1 result is not only a testament to Dermot’s incredible talent and songwriting but is a reflection of the hard work and determination of our fantastic team at Island Records, aligned with the vision and drive of Tap Management,” said Island president Louis Bloom.

In keeping with recent artist breakthroughs, Kennedy’s No.1 follows years of development, touring and streaming support.

“Even before I signed Dermot, he had a groundswell of fans flocking to stream his music on DSPs, which has grown in line with his live following,” Bloom told Music Week.

“Spotify have been particularly big supporters from the early days. Before Dermot even had a manager, James Foley [lead, UK and Ireland, music culture & editorial] invited him into the UK office to meet him. James has undoubtedly been one of Dermot’s biggest supporters to date.”

YouTube made Dermot Kennedy an Artist On The Rise, while Apple Music and Amazon Music have also shown strong support.

“He started releasing music himself in a DIY fashion, so he's built it up over a number of years,” added Bloom. “What I love about him is that he's not just another singer-songwriter. He’s redefining the genre of singer-songwriters, because he's got an innate love of hip-hop and pop music. So he's this cross-genre act, which helps with playlisting because he's not just in one lane. There’s got to be something to speak to the new generation.”

Bloom stressed that Kennedy’s musical direction was his own choice.

“Yeah, it's him, you can see it in his record collection, the clothes he wears, it's his own lifestyle that’s reflected in the music,” said Bloom. “One of the first things we did was to put him in with hip-hop producer Mike Dean [Kanye West, Travis Scott, Beyonce & Jay-Z], so contextually it helps define him as something different.”

Island’s campaign strategy has gone to plan with the single Outnumbered entering the Top 10 for the first time, just as the album hit No.1. With a new peak of No.8, Outnumbered has sales to date of 264,519 (OCC).

Kennedy has 10,155,156 monthly listeners on Spotify, fuelled by playlist support.

Bloom added: “It's not Sunday afternoon rootsy stuff, it's going into pop, it's going into the The Pop List, Today's Top Hits, Hot Hits UK. It's not just indie, its not just singer-songwriter. He's competing with the biggest artists in the world right now, which is a great place for someone to be while at the same time singing so personally.

“In terms of the lyrics, the guy is a poet. He's got these pop beats but he's a poet, he's wearing his heart on his sleeve. So that combination of the singer songwriter element with the contemporary production is totally unique and nobody else is doing it quite like him.”

While Kennedy is a streaming artist, 69% of week one sales were physical. Bloom is confident that his debut artist is reaching a wide audience.

“I honestly think so,” he told Music Week. “I’ve been lucky enough to work with Hozier, Ben Howard and Mumford & Sons. I've worked with all these artists that cross demographics and I think he will do as well, because he's made a body of work. This album is absolutely exceptional and it's got so much depth to it and it tells a story.

"We're playing the long game because we think he's a career artist. This is about the next five to 10 years - he is a future Island catalogue artist."

The success with Kennedy coincides with the first No.1 airplay hit for Island artist Post Malone.

To read the Music Week interview with Louis Bloom subscribers can click here.