'It's a bit of a fairy tale': Manager Owain Davies on the incredible rise of Sam Fender 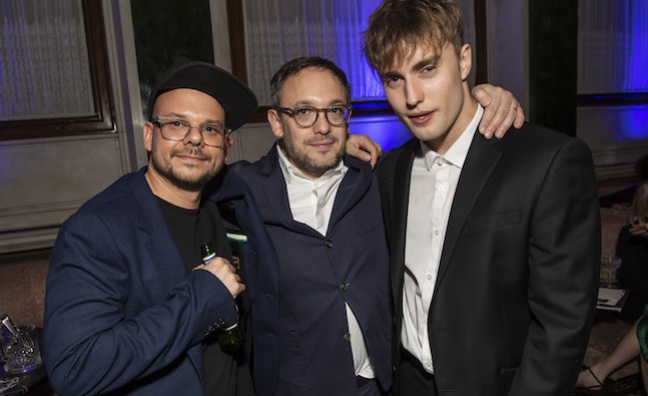 It all started with a Fender bender six years ago.

Owain Davies, director of OD Management, has told Music Week how he discovered Sam Fender after a big night out celebrating a double BRITs win for another management client, Ben Howard, in 2013.

Now Fender has a No.1 album, Hypersonic Missiles, an arena tour and serious global ambitions. As revealed in the latest issue of Music Week, his success involved a targeted campaign by Polydor and strong support from BBC Radio 1.

Here, Davies, pictured with Fender and Polydor co-president Ben Mortimer, opens up about the debut album strategy and his hopes for the “humble lad”…

You didn’t rush the album after the BRITs Critics’ Choice win. What was the strategy?

“It's just been a slow build really, quite old school - he's just toured and toured. I think a lot of people [in the industry] probably underestimated him. It's not like we've had any massive Top 40 singles, we've just built a huge loyal fan base - you can see that in the tickets we sell. We felt that with the Brits Critics’ Choice we had to get the record out this year. It just feels like the right time, it feels like Sam's time. It's been really nice to have so many positive emails from so many industry peers. It’s funny who gets in touch - rival labels, major label heads. You know, it feels like there's love towards Sam. He’s just a nice Geordie, a humble lad. I get the impression people want him to do well.”

You were never worried by the lack of a hit single this year for Sam?

“Not at all, I had a similar experience with Ben Howard, who I also manage. Ultimately, if the album and the tunes are good enough, it will find its way.”

And he writes his own songs without co-writers…

“Yeah. It’s 100% him, it is rare. It's unbelievable how many songwriters get in touch thinking he may need a co-writer. We've stuck with the producer we've used for the last four or five years, an unknown producer called Bramwell Bronte. That was key for us in terms of which label we went to. There was a lot of interest in Sam. We took our time deciding our label home and it was of paramount importance that they shared our vision in terms of producers. We didn't want to sign to a label and change our team. We're loyal lads, we'll just continue to do what we've been doing the last few years. Some of these tracks were recorded in my shed – literally, Play God was recorded in my garden shed in Northumberland. Then we built our own studio.”

How did you discover Sam?

“When Ben Howard won the BRIT Awards six years ago, I went on a bit of a bender and stumbled across Sam. It was just that instinct, he was playing guitar in the corner of the pub and that's how it all began really. It's a bit of a fairy tale story after all these years, you know, it's kind of overwhelming right now for all of us. I'm just so proud of him. It’s just a magic record. He’s just an undeniable talent, he's hard to ignore.”

What do you think the wider public have responded to with Sam?

“He's got it all, hasn’t he? The songwriting, it really is from the heart. I felt it in that pub six years ago - his voice, his live show, his banter there. He’s just a relatable, normal lad.”

How’s it going working with Polydor after those years of development?

“I remember we put Play God out ourselves through AWAL. There were all of these label presidents [calling] and I wasn’t really picking up the phone to anyone. We just bided our time. If you look at the acknowledgments on the [Hypersonic Missiles] vinyl, you'll see that's there's quite a nice gushing paragraph about the [Polydor] A&R team, and he says something like, ‘It was fun for us, but it was hell for them’. Because they literally followed us to every show up and down the country and further field, across Europe and even the States. They shared our passion and belief, they didn't want to fix anything, they didn't really want to change it, they trusted our team. It felt like the right decision and it's definitely proven to be the right call.”

They even let you release the album on MiniDisc…

“Yeah. It was funny. I nearly got laughed out of the planning meeting for suggesting MiniDisc. By the next [meeting], they had all sold out. We did a limited edition MiniDisc, the fans are just excited.”

How important has live been in his development?

“The amount of tickets we've done up north is incredible. People up there have probably been waiting for a guitar band to break through for years, and the support up there has been phenomenal. We're selling tickets to some big shows, we've broken records for the amount of sales at Newcastle Academy. We did four shows, 8,000 tickets, in a minute.”

“It definitely didn't happen overnight. He's been on that live circuit for years. We did every kind of support going under the sun. I invested quite heavily as well myself in his development before there was any other label support. Ultimately, it's his tunes. His writing is just getting better and better.”

To read the full report on Fender’s breakthrough, pick up the latest issue – or subscribers can click here.