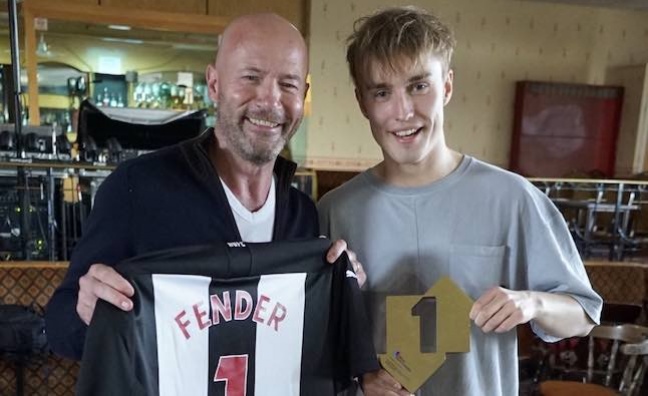 Sam Fender has confirmed a major tour next year with his biggest headline shows to date, including a gig at Alexandra Palace.

The BRITs Critics' Choice winner from North Shields hit No.1 on Friday (September 20) with his debut album Hypersonic Missiles (Polydor). Fender was presented with an Official Charts No.1 award in Newcastle by local sporting hero Alan Shearer.

In the latest issue of Music Week, Fender's management and label team talk about his big breakthrough. Hypersonic Missiles racked up 41,000 sales, including 8,200 on vinyl. It is the fastest-selling vinyl album of 2019 so far, though Fender's record will now face a challenge from Liam Gallagher.

“This is beyond dream territory," said Fender. "I thought my dreams were complete when I played Jools Holland, never mind this madness. Thanks to all the fans. This is just the start.”

The tour is promoted by Communion (London) and SJM. Fender's live agent is CAA.

Unusually, for a charting artist in 2019, the songs on Fender's indie-rock debut are all self-penned. It was recorded at his own self-built warehouse studio in North Shields with long-standing friend and producer, Bramwell Bronte.

As well as the No.1 album, the singer-songwriter has secured his first Top 50 singles - Will We Talk? at No.43 and the LP's title track at No.48. With support from BBC Radio 1 and its Brits List initiative, Fender has had four Top 40 airplay hits, including Will We Talk?, That Sound, Play God and Hypersonic Missiles.