Tech that: The full story of the first Music Week Tech Summit 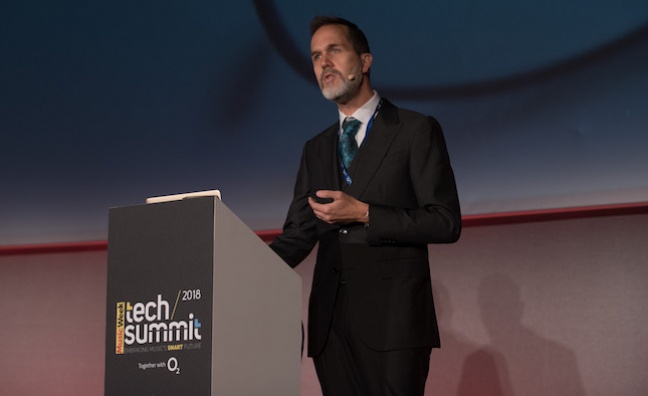 Bold new thinking was the order of the day at the Music Week Tech Summit Together With O2. Staged at The O2, the inaugural event also had Kobalt, Ticketmaster, MQA, PRS For Music and Ingrooves on board as partners.

More than 300 people snapped up tickets to see big-name speakers, including executives who jetted in from the US to share their vision for the future of the music industry.

Closer to home, Joe Harland (pictured), head of visual and multiplatform radio for BBC Radio 1, 1Xtra, Radio 2, 6 Music and Asian Network, kicked off the day with a roving performance on stage that highlighted disruption in music tech. It was a lesson in counter-intuitive innovation as Harland - drawing on futuristic visions from Blade Runner - took the audience through the digital history of Radio 1, from John Peel’s webcam to the viral animated cat video of Elbow covering Destiny’s Child and its increasing moves into on-demand content in recognition of its audience.

Amazon Music’s head of programming and content, Alex Luke, put the spotlight on an emerging artist in his session with Communion-signed Joseph J Jones. The music technology guru from a trillion dollar company and the Essex soul man made for an unlikely pairing, but it was illuminating as they explored Amazon’s plans to use Alexa and global playlists to help break new artists. "It's one of the things we've realised as we've been forging this path into voice - discovery is a challenge for unknown artists,” said Luke.

Former Google exec Rian Liebenberg submitted himself to a Music Week grilling just seven weeks into his big new job at Kobalt. The company’s AWAL division was represented by Aaron Bogucki, VP, digital, who joined fellow panellists in exploring the impact of technology on digital marketing in the music industry.

Dua Lipa - who made an appearance at the Music Week Awards earlier this year - was one artist under discussion on that marketing panel. Sebastian Simone, head of digital Warner Bros Records, said: “Social media and streaming and the evolution of technology in those spaces have completely changed how we develop and promote our artists.” But that doesn’t mean that traditional media advertising and marketing is dead and buried - Jackie Wilgar, SVP, marketing - international at Live Nation, reported that outdoor advertising had become more important for the promoter.

Start-ups are the key to disruption and the Tech Summit panel led by BPI Innovation Hub leader Vanessa Higgins focused on how the industry can work help foster the right creative environment at start-ups. “It’s an industry much more open to innovation,” said Isabel Garvey, MD, Abbey Road Studios.

There was a lot of buzz about VR at the Tech Summit, so the case study from Melody VR co-founder and COO Steven Hancock was a must-see session with audience members quizzing him about the future of this potentially game-changing technology.

"We've found something that's completely new, different, exciting, and gives the artist that expressive platform to be able to create something that they couldn't in the real world, ultimately," Hancock told hundreds of attendees at The O2.

Head to the Music Week site to read comprehensive coverage of the biggest new event for music and technology. Magazine subscribers can read our preview with guest speakers here.