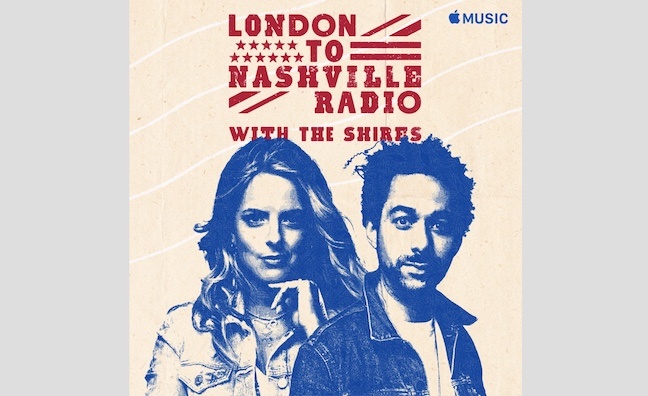 That’s the tag line for London To Nashville Radio with The Shires on Apple Music Country, the streaming giant’s new station dedicated to the genre.

Following their long distance relationship over several years with Nashville, now the British country duo – Ben Earle and Crissie Rhodes – are bidding to become tastemakers for the genre.

“It’s amazing, it really is a bit of an honour really to see our names alongside the other hosts like Carrie Underwood, Morgan Wallen and Luke Combs,” said Earle. “We’re flying the flag for UK country and putting our perspective on how we see country. It's amazing how much it's grown during the time we've been together. We’re playing mainly American stuff, but we do have a part of the show where we're going to try and spotlight the UK acts, which is really exciting.”

Rhodes praised Apple Music for going beyond the realms of a regular streaming service by launching a genre-based radio station with artists.

“It’s great because they've got so many artists,” she said. “It's giving the fans that option to get to know their favourite artists a little bit more through their choices of music, but also talking about songs that have perhaps inspired them or that they're loving right now.”

Earle added: “It was so collaborative. What we love about it is we get to get our personalities across, we get to talk about what we're passionate about, which is country music and that UK perspective on it. I'm guessing that’s why the other artists love it, because they get to do what they want to do and not what they’re told to do.”

We get to talk about what we're passionate about, which is country music and that UK perspective on it

Apple Music Country bills itself as the “definitive place for every lane of an increasingly diverse genre”.

“It's so exciting to see how country as genre is so eclectic now with elements of hip-hop and pop,” said Earle. “We believe that country should be global.”

“We have our own song choices as well, so it definitely feels like a radio show,” said Rhodes. “Both of us have done lots of radio shows in the past, but it's mostly been us being interviewed – and we know everything about ourselves. All of sudden we’re the interviewers asking the questions and running the whole show.”

The Shires are making more of a US impact with new label BMG and are set to reveal a major feature with an American country act. But Earle admitted some US listeners may be baffled.

“The fact that we get to have our British accents on there, I’m sure we’ll have to translate sometimes for Americans," he said. "But just being part of the Apple Music Country family, and the fact that it is worldwide to 165 countries, is just mind-blowing really.”